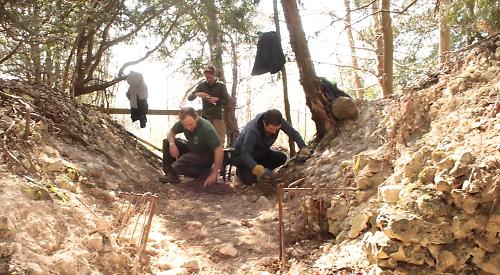 A DILAPIDATED folly which lies half-buried in woodland near Whitchurch could be brought back to life as a space for dramatic and musical performances.

A team of archaeologists has begun digging up the brick and flint structure on the Hardwick Estate, off Hardwick Road, and is seeking volunteers to help finish the project.

They need to remove a layer of collapsed soil up to 1m deep covering the so-called “bear pit” above Hardwick Stud, which is thought to have originally been a chalk quarry and was accessible to the public many decades ago.

Older villagers recall walking to the hollow along public footpaths to sit and reflect but it has been fenced off in recent years because of fears that the structure is unstable and could collapse.

It’s believed that the folly, which consists of two flint cave-like buildings facing each other, was built in the Tudor era at the same time as Hardwick House, the Grade I listed ancestral home of the Rose family, who still live there.

Such structures were popular at the time, with a similar example existing a short distance downstream at Lower Basildon, and sometimes included a waterfall channelled from an underground source.

Once the folly has been fully exposed, parts of it could be restored or reconstructed by a specialist builder using materials typical of the period.

As well as offering a quiet sanctuary for walkers, it could host community events similar to the squash and pumpkin festival hosted annually by the Tolhurst family, who run an organic farm on the estate.

The dig was prompted by Simon Smith, a member of the South Oxfordshire Archaeological Group, who knew of the pit’s existence from old maps and asked landowner Miriam Rose for permission to proceed.

Mr Smith, from Caverhsam, is working alongside archaeologists Sarah Lambert-Gates, Nick Pankhurst and Rory Williams-Burrell, of the University of Reading, and Romilly Swann, who all live on the estate.

They have dug a number of small test pits to gauge the soil depth but won’t be able to start in earnest until the autumn as they have to spend the summer at dig sites elsewhere.

The pit also contains a short tunnel leading to a disused ice house, a domed underground structure which would have had a locked door and been used to keep food and drink cool in the days before electrical refrigeration.

The group hopes to restore this too but that would come later as it is also at risk of collapse and would be more complicated to repair.

Miss Lambert-Gates, who is also a musician and hopes to perform at the site, said: “It’s a fascinating hole in the ground with some original flintwork. There are several like it in the woods but it’s by far the biggest one.

“It isn’t safe at the moment because the archways could fall on someone and our first step is to reverse that.

“We’ve heard from people who liked to go there and we’d like to restore that access in a safe way.

“It’s quite exciting to see it slowly being unearthed and, for us, it’s an easy dig because there are no sensitive areas and we’ve just been able to use mattocks and shovels.

“The chances of finding any artefacts in the ground are pretty slim.

“We’ve got down to a set of steps which are visible in old photographs from the Museum of English Rural Life in Reading and it will be interesting to try to learn more about its history as we don’t know a lot at the moment.

“We’ll be able to dig on a couple of days a month from the autumn. Once we’ve properly got stuck in, there’ll be a lot of soil to shift so we’d encourage people to get involved.

“We’d also love to hear people’s memories as we’ve heard about the things they used to do, like lighting little fires or standing in the middle singing songs.”

Old maps also refer to the ice house as a “sounding house”, indicating that it may have also been used for small concerts.

A previous landowner may have coined the nickname “bear pit” to deter intruders from attempting to steal food and drink, although this has not been proved.