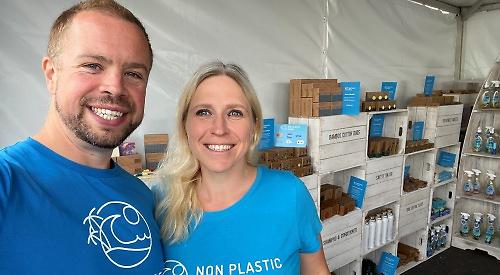 A SWIMMER has criticised MPs for not backing a proposal to stop water companies dumping sewage in rivers.

Gareth Dean, 41, from South Stoke, runs his own company, Non Plastic Beach, which sells alternatives to products commonly made from or packaged in single-use plastic.

He also swims in the Thames six times a week near the Benson sewage treatment works, which is one of the worst-affected stretches of the river.

Sewage was discharged into the river at Benson for nearly 900 hours in the first half of last year.

Mr Dean wrote to Henley MP John Howell before last week’s vote in the House of Commons on an amendment to the Environment Bill that would have made it a legal duty on water companies to restrict sewage going into rivers.

The amendment was defeated when 268 MPs, including Mr Howell, voted against it.

Mr Howell said he could not support the amendment because upgrading the country’s infrastructure in order to eliminate sewage would cost up to £600 billion.

He said that the water companies would invest £7.1 billion in environmental measures between 2020 and 2025. Of this, £3.1 billion would be spent on storm overflow improvements. Mr Dean said he was disappointed, adding: “Even if it does cost that much, then leaving the problem alone isn’t going to help. It is just making things worse and when you do eventually come to look at, it the cost will be even higher.

“When are things going to get fixed? The Bill is full of loose language that gives a lot of room for water companies to get away with not doing very much.

“A lot of it is about self-monitoring and the Environment Agency has had a lot of budget cuts.

“The chance of the water companies getting caught if they are bending the existing rules is quite limited, so we needed something strong from our politicians.”

The vote was condemned by the Rivers Trust, the Angling Trust and campaign group Surfers Against Sewage as well as Jo Robb, the “River Thames champion” for South Oxfordshire District Council.

Mr Dean, who lives with his wife Nicola, 42, and their children Isla, four, and Jamie, two, moved to South Stoke seven years ago. He is originally from Kent and has spent most of his working life doing PR and communications in the car industry, specialising in electric vehicles when he worked for Nissan.

During the coronavirus lockdown, he would swim in the river every day and now he meets up with other local swimmers regularly.

However, he has to adapt his swimming technique after heavy rainfall, which can cause pipes to overflow and sewage spills.

Mr Dean said: “It is a constant worry, unfortunately. Benson has an unenviable record for being one of the worst stretches on the Thames.

“You know that whenever there has been heavy rain it will be worse and you have to avoid the river.

“If I do go swimming after there has been rain, I will keep my head out of the water for three or four days.

“There have been times when I have gone down to the river and a boat goes by and the bubbles stay there for a lot longer than usual. There’s also a layer of scum that looks really unpleasant.

“This stretch is used by swimmers, boaters, paddleboarders and both Oxford universities for rowing. There’s also lots of wildlife.

“It is terrible to think that all those people use it but nothing is being done. We need to think if we should be granting planning permission for any new houses near Benson while the sewage works is dramatically over capacity.”

The Deans founded Non Plastic Beach in 2018 following a trip to Mauritius.

The couple are keen divers and realised they could do more in their own lives when they saw the efforts being made to reduce plastic pollution in the ocean.

The business started at their home but they now have a unit at the Church Farm business park off Reading Road, Woodcote.

Its products include biodegradable bamboo toothbrushes, shampoo and conditioner bars and are sold in more than 90 countries.

The company provided toothpaste tablets for the first plastic-free flight from Abu Dhabi to Brisbane in 2019 and its celebrity endorsers include Julia Bradbury, Eamonn Holmes and Gary Lineker.

Mr Dean said: “We are not telling people they should cut out all plastic immediately but instead try to change one or two things and find a non-plastic alternative.”