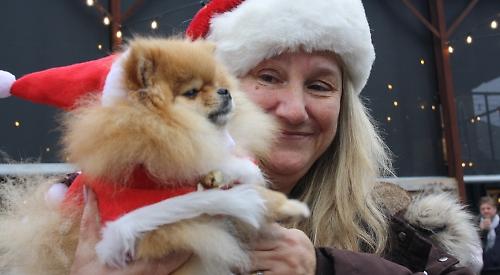 PETS of all shapes and sizes took part in a festive fancy dress dog show in Nettlebed at the weekend.

About 30 pooches dressed as reindeer, Christmas puddings and presents paraded on a “catwalk” in a yard outside the Cheese Shed at the Nettlebed Creamery.

The event, which was hosted by business owner Rose Grimond, raised £150 for Hearing Dogs for Deaf People.

Among the owners were actors Jeremy Irons, who lives in Watlington, and Simon Williams, who lives on the Nettlebed Estate, and children’s entertainer Bertie Slippers.

First prize went to Mandy Regan’s miniature dachshund puppy Jellybean, who was dressed as a female reindeer with a pink tutu, silver tinsel and pom-pom hat.

The 10-month-old  wowed judges with her spinning dance trick and won a photoshoot with Jane Rayner Photography and some treats.

Orson, a 13-year-old schnauzer and King Charles spaniel cross, came dressed as Doctor Who dog K-9. The foil costume was made by her owners, the Scudamore children, Sylvia six, Clem, eight, and John, 11.

Sylvia said: “It took us over an hour. We measured Orson and then we cut out the shapes and covered it in foil. Then my brothers drew K-9 on the sides. I made the buttons on the top of his costume.

“When he wags his tail, it hits the side of his costume and makes a loud noise.”

Mr Flaxton said: “We have had Milly for almost a couple of years. She was from a puppy farm where she gave birth to litters of puppies before she turned one. She had sustained a broken jaw and we think she may have been kicked.

“She was then rescued and went to live with an elderly couple, who really loved her but, unfortunately, they became ill and were unable to look after her anymore and she almost doubled in size and lost most of her teeth.”

Miss Fowler said: “She is so tiny and has lots of scars from her days at the puppy farm. She is such a lovely girl, she’s so friendly and loves attention.”

The charity was represented by Dolly the cocker spaniel, who wore her uniform and Christmas ribbons.

Tamsin Riddell, who works at the Cheese Shed, said: “We have always been dog-friendly here. People love to walk their dogs around the trail and then back towards our barn for a toastie and a coffee.

“ We decided to hold this event as it’s fun to engage with our customers and Hearing Dogs for Deaf People is such a great cause.”

Kevin Game, community fund-
raising manager for the charity, said: “One in six people in the UK is affected by hearing loss.

“Our dogs help their deaf partners by alerting them to everyday sounds that hearing people take for granted, such as doorbells or crying babies, but also important sounds, such as smoke or fire alarms.

“Isolation and loneliness are unseen symptoms of hearing loss and are incredibly damaging. Our dogs offer not only companionship but also a reason for our recipients to get back into their communities and re-engage with life.”

All the dogs received a rosette.