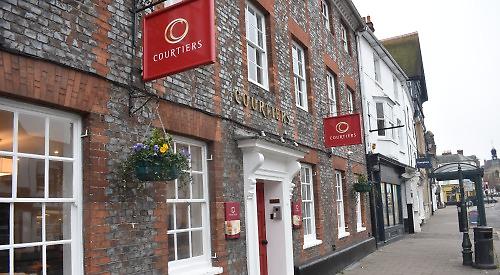 A MAN who was sacked by a Henley investment business for wanting to work from home during the coronavirus pandemic has been awarded almost £15,000.

Nick Quelch said he was following government advice because his girlfriend with whom he shared a one-bedroom flat was clinically
vulnerable.

But Courtiers, a wealth management company in Hart Street, fired him in July 2020 when he refused to return to the office to work.

Now an employment tribunal has found that he was unfairly dismissed and ordered the company to pay him £14,746 in compensation.

Mr Quelch, 27, began working for Courtiers as a compliance assistant in June 2018.

He had graduated from the University of Reading and still lived in the town with his girlfriend, who has asthma and a heart condition so was clinically vulnerable to covid-19.

In March 2020, Mr Quelch spoke to his manager Stuart Richards about his concern for his girlfriend and it was agreed that he could work from home, as she was being allowed to do by her employer in Reading.

The tribunal heard that the couple were worried about catching coronavirus and isolated themselves throughout the spring and summer, even when the restrictions began to ease.

Courtiers allowed most of its employees to work from home in March and April 2020 with only a few individuals going into the office to collect and forward mail.

A board meeting held in April heard that employees were working from home successfully but the company also identified a number of negatives, including issues with home set-ups and internet access, employees’ mental health being affected by isolation and collaboration and communication between individuals being impaired. In May, Courtiers told its staff about a three-phase plan for a return to the office, beginning with employees who wanted to return immediately and ending with those who needed to return at a later stage due to their circumstances. Mr Quelch was placed in the final category.

Government guidance issued on June 24 stated that businesses should make every reasonable effort to enable working from home as a first option and that particular attention should be paid to people who lived with clinically vulnerable individuals.

He said: “I have full trust in him and I want to make sure he remains in the best mental health possible.”

Ms Ruston replied that Mr Quelch would be expected to return to work on July 6.

Mr Quelch then also emailed her but she replied that a core part of Courtiers’ culture was the social environment created within the office space.

She said: “Please be reassured that we have done everything we can think of to keep Courtiers sites clean.” Mr Quelch then emailed her to say he had decided that he would not be returning to the office.

He said: “I have demonstrated that I am able to work from home and there is no aspect of my role which cannot be performed from home.

“Stuart has confirmed this to you and has been impressed at my level of productivity during this time.

“The government guidance for people who work in or run offices, contact centres and similar indoor environments states that ‘people who can work from home should continue to do so’.

“As such, I will continue to follow this guidance by continuing to work from home successfully and therefore minimising the risk of transmission to myself and my clinically vulnerable partner.”

Ms Ruston replied that Mr Quelch was required to return to the office. Chief executive Jamie Shepperd had said he could book annual leave or live separately from his girlfriend if he was concerned.

On July 8, Ms Ruston wrote to him saying he must return to the office or he would be disciplined, his pay would be stopped and his system access disabled.

He did not return and the company disabled his system access and placed him on unpaid leave.

The company began the disciplinary process and Mr Quelch requested the hearing was conducted remotely. Ms Ruston refused, saying he could be recording the meeting or have a third party in the room without the company’s knowledge.

The company’s policy allows for someone to bring a chosen companion to a disciplinary meeting and for the hearing to be rescheduled if that person is unavailable.

Mr Quelch’s chosen companion was Mr Richards but he was unavailable on the day of the hearing and the company refused to reschedule so Mr Quelch did not attend.

Ms Ruston then wrote to him to say he had been dismissed for gross misconduct. Mr Quelch appealed but was unsuccessful.

In September 2020, he found a new job in Manchester and the couple moved north. Mr Quelch’s girlfriend continues to work remotely.

The tribunal, which was held online, found that Mr Quelch was unfairly dismissed and subject to detrimental treatment contrary to the Employment Rights Act.

Employment judge Mia Milner-Moore said the company had asked him to return to a dangerous workplace because covid-19 had been classified as a serious and imminent threat.

She said the negatives of working from home set out by the company had not applied to Mr Quelch, except perhaps the loss of social capital.

“Now we’re all vaccinated and she had hers quite early. I’m going to the office three days a week in my current job and I’m fine with that because she has been vaccinated.

“But at that time there was a real danger for my girlfriend and the advice was to work from home.

“As a compliance analyst, my job is to make sure companies are doing the right thing and what they had done was wrong.”