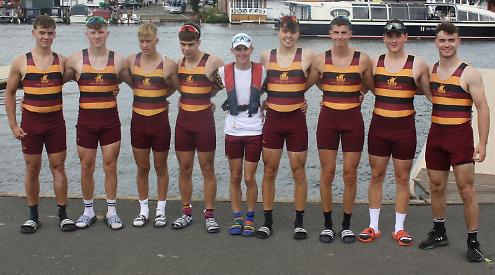 THERE were mixed fortunes for local crews on the first day of Henley Royal Regatta.

Meanwhile, Shiplake College and Reading Blue Coat School in Sonning, took to the water in the student and junior events.

Their first race saw them beaten by Vesta Rowing Club in the Britannia Challenge Cup, for coxed fours, by three and a half lengths in a time of seven minutes and 44 seconds.

Henley initially took a canvas lead, but this was overturned as the crews reached the half-mile mark with Vesta taking a one length lead.

Once Vesta go in front they continued to go further ahead and by the time the crews passed Remenham Club, they had moved into a three and a half length lead.

At grandstand, Henley had reduced the gap to three lengths but could not keep up with their opponents and fell further behind at the finish.

Will Carey, 24, in the number three seat, said the race was always going to be a difficult one.

He said: “Our plan was to stay with the crew as much as we could but they held out at a higher speed for longer and so, once in front, they were able to maintain the gap.

“We haven’t beaten Vesta before and this is the closest margin we have got to them so there are positives to take. We ran the race how we wanted to run it.”

Danske Studenters Roklub, Copenhagen, Denmark, beat a Henley Rowing Club and University of London composite crew “easily” in the Prince of Wales Challenge Cup, for quadruple sculls, in a time of seven minutes and 19 seconds.

Henley picked up a win against local rivals Marlow Rowing Club A in the Fawley Challenge Cup, for quadruple sculls, by three-quarters of a length in a time of seven minutes and 41 seconds.

Upper Thames won two and lost one of their heats.

Their first race saw them beat City of Oxford Rowing Club in the Britannia, by a third of a length in a time of seven minutes and 55 seconds.

At the quarter-mile mark both crews were level but at the barrier Oxford had a canvas lead, which they then extended to a third of a length.

Upper Thames came back and at the progress board both crews were level. At the finish Upper Thames had their noses in front.

Rob Leech, 31, who lives in Henley and was stroke of the Upper Thames boat, said: “We had a solid start and settled into a solid rhythm and absorbed the pushes that Oxford were making.

“We then made our move close to the finish and got in from. The roar from the Upper Thames supporters definitely gave us a hand and pushed us on but the moment we got ahead we started to become confident of getting the result we wanted.”

Upper Thames also won their Wyfold Challenge Cup heat, for coxless fours, dispatching London Rowing Club A by one and three-quarter lengths in a time of seven minutes and 33 seconds.

But the club suffered defeat in the Prince of Wales at the hands of the University of Surrey by two lengths in a time of eight minutes and five seconds.

They beat Bedford School in the Princess Elizabeth Challenge Cup, for junior eights, by three and three-quarter lengths in a time of seven minutes and 31 seconds.

Shiplake raced into a three-quarter length lead early on and never looked in trouble, increasing the gap between the crews to five lengths at the mile marker.

The crew slowed down as it passed the grandstand but came away with a comfortable win.

Shiplake cox Wallace Fisher, 18, from Binfield Heath, said: “We went into the race confident. We were aware of our potential and just had to race our race.

“We had to go out hard, which was our race plan and by the time of the barrier we were well ahead. At that point we started unwinding as we have a very important race tomorrow against ST Paul’s, which will be a real fight but we are very confident and we have been going really fast in training.

“We believe we can go all the way this year. We are the fastest crew Shiplake have ever had.”

Sir William Borlase Grammar School beat Shiplake College in the Fawley Challenge Cup, for junior quadruple sculls, by four and a half lengths in a time of seven minutes and 59 seconds.

Shiplake pupil Fin Worthington, in the number three seat, said: “The race was all right. We just went out there and we achieved our goal, which was to compete at the royal. We are just going to enjoy the rest of the week and we will have another go next year.”

The college lost to the University of California, Irvine, USA, in the Temple Challenge Cup, for student eights, by two and a half lengths in a time of seven minutes and 10 seconds.

Meanwhile, Woodrow Wilson HS, USA, beat Reading Blue Coat School in Sonning in the Princess Elizabeth by one and three-quarter lengths in a time of seven minutes and 33 seconds.