Big names by the dozen at town’s 12th literary festival 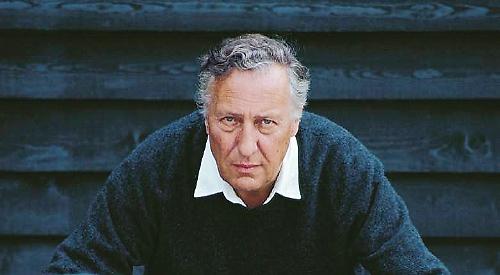 NOW in its 12th year, the 2018 Henley Literary Festival is the biggest yet — with 170 talks, Q&As, workshops and performances for all ages to enjoy. Having expanded to nine days, the festival is running at venues across the town from next Saturday, (September 29) to Sunday, October 7. Here, festival programming director TOM RYAN picks out 12 things not to miss at this year’s event

1. Make the most of the Baillie Gifford Festival Hub

A large marquee in Market Place, the Festival Hub is split into two. One half hosts events including Oz Clarke, Supertato, Leander Club: The First 200 Years, Black Farmer founder Wilfred Emmanuel-Jones and The World of Supersaurs. The other is home to the festival box office and a wide range of stalls including Laithwaite’s Wine, Caldesi in Campagna, the National Trust, Nettlebed Creamery, Danesfield Spa, the Kenton Theatre and Mr Hobbs Gin. There will be free activities for children over each weekend with the River & Rowing Museum and Buster Books, as well as Henley’s biggest caterpillar courtesy of Shiplake Village Nursery.

2. Share your love of books with children of all ages

The festival is living up to its promise of “events for ages 0 to 100” more than ever this year, starting with three interactive storytelling sessions aimed at babies: Pat-a-Cake on Saturday, September 29, and Maybe the Moon on Sunday, October 7.

Parents are also encouraged to bring babies along to Fearne Cotton’s adult event in conversation with Bryony Gordon on Friday, October 5, with each ticketholder receiving a copy of her new book Hungry Babies.

Events for ages three and up include Hugless Douglas creator David Melling and Not Yet Zebra, while those for five and up include A Bear Called Paddington and Rob Biddulph, the illustrator of this year’s festival programme cover. Older children can enjoy Q&As with 95-year-old The Tiger Who Came to Tea author Judith Kerr and Paralympian Ade Adepitan — both on Saturday, October 6.

Festivalgoers have the chance to visit the riverside members’ club throughout the festival, just a week after its much-anticipated fitness centre opens.

With podcasts proving more popular than ever, the festival will be hosting its first ever live podcast recording on the evening of Monday, October 1, when Radio 2’s Joe Haddow brings Book Off! to Henley town hall.

Each episode sees two authors — previous guests have included Paula Hawkins and Lionel Shriver — discuss their own writing as well as one of their favourite books of all time, with a winner picked at the end of the show.

At the festival Joe Haddow will be joined by Sunday Times bestselling novelists Adele Parks and Tasmina Perry. And podcast listeners may also want to join the team behind BBC Radio Five Live’s chart-topping You, Me and The Big C podcast for their event based around Deborah James’s book F*** You Cancer: How to face the big C, live your life and still be yourself at Phyllis Court on Sunday, October 7.

The festival has its strongest
line-up of sports stars yet this year, from current England cricketer Moeen Ali with his much-anticipated autobiography to a host of former sporting greats. Liverpool footballer turned Newcastle and England manager Kevin Keegan makes a rare literary festival appearance, as does former England cricketer Chris Lewis, who will look back on a life and career that includes whistleblowing on match-fixing and a spell in prison, in conversation with Sky’s Gary Newbon.

The 200th anniversary of the Leander Club will be marked by a special event featuring Vicky Thornley, while fellow Team GB rower Alex Gregory will discuss his career and new book Dadventures.

The town hall is home to more events than any other venue, with almost 50 talks, Q&As, performances and workshops.

Politics, feminism, film, poetry, art, fiction, history and more will be on the agenda, as well as a wide range of children’s events.

The award ceremony for the Dragonfly Tea Children’s Story Competition takes place there at 3pm on Sunday, October 7, with the company’s tea available throughout the week.

Thursday, October 4, is the 20th annual National Poetry Day and the festival is joining in with a special event that evening based around the new collection She is Fierce: Brave, Bold and Beautiful Poems by Women. The anthology features both current poets and classics from the likes of Emily Bronte, Maya Angelou and Dorothy Parker. The book’s editor Ana Sampson will be joined by Deborah Alma, aka The Emergency Poet, Reading-based storyteller Becci Louise, and acclaimed “Instapoet” Nikita Gill, who has over 400,000 followers on Instagram.

Some of the biggest names in children’s books today will be heading to Henley for the festival’s schools events, which see almost 2,000 pupils from 27 schools — including Trinity, Badgemore, Rupert House and Stoke Row School — meet some of their favourite authors. And many of them — including Horrid Henry writer Francesca Simon, What the Ladybird Heard illustrator and Oi Frog! creator Kes Gray — will also be doing events for pre-schoolers in the Festival Hub.

A favourite with audiences and authors alike, the festival takes to the Thames each year with the help of Hobbs of Henley.

Events aboard the Hibernia as it travels down the river this year include Debuts on the Thames, which sees Stephanie Cross joined by Ponti novelist Sharlene Teo and Jenny Quintana, author of Waterstones Thriller of the Month The Missing Girl.

This year’s Henley Literary Festival charity partner is Smart Works Reading. Each year they help more than 400 vulnerable women build the confidence they need to get back to work and regain their financial independence, with a bespoke service including interview coaching and personal styling.

As well as having a stand in the Festival Hub, they will be hosting their own event there at 6.30pm on Friday, October 5, the first in a series of fun, inspiring networking events to bring women together to explore the world of work.

Over a glass of wine, comedian Toni Kent will be joined by a panel of women in business to share their success secrets — including Lape Adejuwon, designer and founder of Elle Won Handbags, and Sally Beaton, nutritionalist and founder of Women With Sparkle.

As well as big names and established bestsellers, the festival is proud each year to showcase the best new writers.

And the best in new non-fiction writing is also featured, including Slumflower blogger Chidera Eggerue — whose What a Time to be Alone is making waves — and Looking Fabulous Forever founder Tricia Cusden.

12. Find out about the London Library

Home to over one million books and periodicals, ranging from the 16th century to this year, the library — located in St James’s Square, Piccadilly — is partnering with the festival this year. Visitors to the Festival Hub will be able to find out more about the organisation while three events will include illustrious members including Antonia Fraser, Victoria creator Daisy Goodwin and travel writer Sara Wheeler.

• For more information and to book, visit the festival online at www.henleyliteraryfestival.co.uk or call (01491) 575948. During the festival itself, the box office will be located in the Festival Hub in Market Place.