Choir warms the cockles of the coldest church in Christendom! 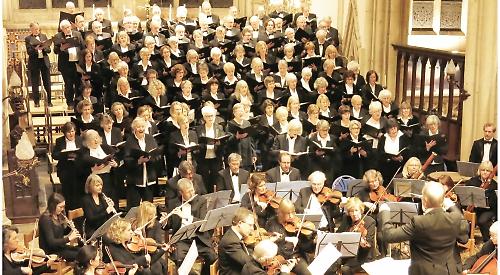 WHEN you arrive at Dorchester Abbey and first walk inside, after taking a few steps beyond its modern glass portico, you are immediately embraced by a deep awareness of the building’s medieval roots and its history going back to Saxon times.

This assault on one’s senses makes this ancient building the ideal setting for a performance of Richard Blackford’s Mirror of Perfection — a musical biography of Saint Francis of Assisi (1181-1226) for soprano, baritone, choir and instrumental ensemble.

This lyrical and attractive work, sung in Italian and French, blends a gentle touch of distinctive modern harmonies with traditional devotional polyphony to pleasing effect. It plays easily upon the ear and the emotions.

The seven “canticles” of which the piece is comprised are based upon St Francis’s teachings of nature and love; not forgetting his famous birds that have an avian canticle of their own.

The word “perfection” features not only in the work’s title but also in its performance on this occasion. The Benson Choral Society was on fine form under their accomplished conductor of more than 40 years’ standing, Christopher Walker.

Clear diction and evenness of presentation were the orders of the day, and the choir’s affection for the work was evident in their responsiveness and obvious enjoyment of it.

The fiery Spanish soprano soloist Lorena Paz Nieto confidently added a distinctive latin touch and the ever-reliable Philip Tebb was on hand to endow the work with his customary warm and rich bass tones.

The Elgar Orchestra, led by Ron Colyer, featured a competent and intimate ensemble of strings, harp and three horns, the latter closing the work with a serene and very effective postlude, leaving their final notes hanging in the air as only horns can do.

The composer, Richard Blackford, was present and took a bow to acknowledge the well-deserved and strong applause with which his work was greeted.

After the interval the concert resumed with a straightforward and smooth performance of Haydn’s Maria Theresa Mass. For this work the soprano and bass soloists were joined by the mezzo soprano Francesca Sarcino and tenor Nathan Vale to provide an evenly balanced quartet.

This classical mass is nothing special, being a commissioned product of Haydn’s final years when, with 104 symphonies behind him, he could probably have written it in his sleep. Nevertheless, it is a finely crafted work, lightly scored and intended for devotional duties. The performers, to their credit, gave it a sprightly feel — as though it had only just come off the composer’s pen that morning — and the audience received the performance warmly.

Dorchester Abbey used to have the reputation among long-suffering musicians as being the coldest church in Christendom. Be that as it may, on this occasion the risk of frostbite was well worth the visit!