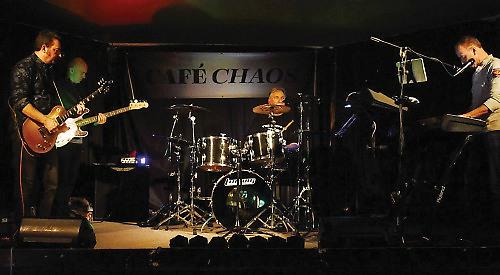 A BLUES rock band who changed their name following a chance encounter with Theresa May in the Bell Street branch of Caffè Nero have been going from strength to strength ever since.

So much so that they are due to play Nettlebed village club next Friday (November 30).

Café Chaos were previously known as KAOS, having formed through the series of Henley Jammers jam sessions that started up in Henley in 2015.

The name was inspired by the Roger Waters album Radio K.A.O.S. but was later judged to be too similar to that of certain other bands.

Recalling their fateful encounter with the PM back in January, keyboard player Nick Brown said: “We were exploring a name change so we went down to Caffè Nero and in walked Theresa May. She sat down at a table next door to us and even asked us if she could sit there.

“We had a look round to see where her security team was, because you can sort of tell who they are, and that gave us the inspiration for our new name.”

Asked if the new name had also been intended as a comment on the UK’s Brexit negotiations, Nick said: “Let’s call it a fortunate coincidence!”

Following the launch of their first EP Blues in Seven in March, the band now have a publishing contract with Sentric Music. They are also moving towards the completion of their first LP, which is being engineered and produced by Pete Brown at Henwood Studios near Wallingford.

Since forming in 2016, Café Chaos have been likened to Pink Floyd, Camel and Focus.

The other band members are Steve Blackall on guitar, Peter Terry on drums and Pete Kruger on bass.

Tickets for next Friday’s concert are £12 on the door or £10 in advance (with concessions £8) from www.cafechaos.net. Doors open at 7pm with music from 8pm.

n NETTLEBED village club is also the venue for the latest in Nettlebed Folk Club’s weekly series of concerts. Monday night (November 26) sees the High Street venue welcome Celtic Fiddle Festival — a supergroup of fiddle players including Kevin Burke of the Bothy Band, Christian Lemaitre of Kornog and Charlie McKerron of Capercaillie. Tickets for the 8pm concert are £16.50 in advance via 01628 636620 or www.nettlebedfolkclub.co.uk