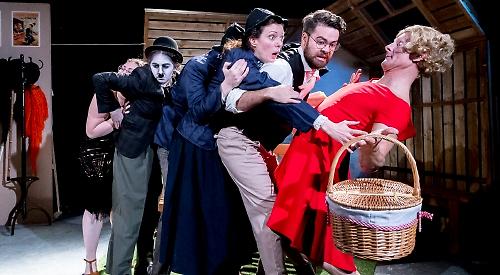 MORE than 100 years on from his creation, Charlie Chaplin’s “The Little Tramp” is arguably the most iconic character in cinema history.

Walt Disney even cited the tramp as one of the inspirations for Mickey Mouse, while Chaplin — who died in 1977, aged 88 — is still the world’s best-loved clown.

But the legendary filmmaker’s remarkable story of stardom and success has a darker side — one that is explored in a new play coming to the Kenton Theatre next month courtesy of London’s Arrows & Traps Theatre Company.

Chaplin: Birth of a Tramp is playing at the New Street venue at 7.30pm on Friday, April 10.

A spokesman for the show, which is touring the UK until June, said: “Raised in the horrific, grinding poverty of a Victorian slum, Charlie Chaplin never knew the security of a stable family.

“Whilst his parents destroyed themselves with disastrous ambition and unshakeable vice, Charlie was thrown on the mercy of the workhouse.

“Desperate to escape his feral existence on the streets of South London, he became captivated by the shining lights of vaudeville, and gradually began to see a way out.

“Arrows & Traps invite you to discover how Chaplin spun personal tragedy into universal comedy in a psychological exploration of one of the world’s most remarkable lives.”

The production has secured the full endorsement of the Chaplin estate and the Chaplin family.

But what drew Arrows & Traps writer-director Ross McGregor to tell the story of the man behind the little tramp on stage?

“I was interested in writing a play where the central character was mute,” he says. “Chaplin is the most famous silent actor in history, so that’s where it began.

“Once I began researching his life, I became fascinated by how his early experiences influenced his art, and how real events caused creative loops and patterns to emerge in his work.

“The drunken father figure, the uncaring institutions, the ‘fallen’ woman in need of rescue — they all can be traced back to his parents, and what happened to him as a child. I was really interested in exploring where his creativity came from.”

What can the audience at the Kenton expect? “Birth of a Tramp is in equal parts amusing and moving. There’s a lot of clowning, music, joy, movement, dance and song, but there’s also character pieces, drama, sadness and tragedy. It’s really quite an epic show — running the audience through the full gamut of emotions.

“But in short you’ll come out knowing new things about one of the most remarkable people in the 20th century, and having explored the impact our parents have on us, for better or worse. You should also laugh a fair amount, as there’s a lot of fun in it.”

Ross’s own theatrical journey began when he was at school.

“It was mainly due to the fact that I suffered from a stammer and found that I could speak fluently if I spoke with an accent — playing someone else, not myself. My English teacher encouraged me to join in with the school theatre productions, so I guess I caught the bug there.

“In terms of writing, I’d always been a keen reader, and when it came to choose my university course creative writing fascinated me — despite never actually having done any.

“I applied, wrote my first short story as part of the application, and got accepted on to the University of Warwick’s writing programme. It was there that I began directing theatre, mainly because the drama societies were looking for people to take on a show, and I thought I’d give it a go.

“I discovered directing is much like writing — you’re both basically trying to tell a story as clearly and simply as possible — and have been following that path ever since.”

Does Ross prefer directing his own plays or those of other people?

“I’d say it’s harder directing your own stuff because you lack that outside eye. Because it’s your work, your viewpoint on how it should be done is narrower. Because you had these voices in your head when you wrote it, it’s natural to expect that to just transfer on to the stage.

“But theatre is at its heart collaborative. I worry as a writer-director whether my stuff is any good. It’s hard to tell sometimes, which is why I bring other creatives in and get my script edited down by other people. It helps to have another pair of eyes that will judge the show honestly.”

Does he work closely with the actors to develop their characters’ backstories? “I don’t actually believe in backstory and historical research for actors — if it’s not in the script, it didn’t happen.

“You can have the most amazing thought about your character ever — maybe they’re an orphan, or lost a family member, or never knew their father, etc — but if they never actually say it the audience will never know, so it’s kind of pointless. If it’s in the script, then fly with it, but doing masses of research into the histories of the real people is redundant if the script has a different take on that version of the character.

“At the end of the day, you’re not making a documentary — it’s a fictional story based on real events. Things are changed, cut, amalgamated, characters say things that the real people never say — you’re telling a story. And if something doesn’t fit with what you want to tell, you have to change it.

“Hannah Chaplin, Charlie’s mother, was in and out of mental hospitals all his life, the first time when he was five years old or so. There’s no dramatic interest in showing each one, so we only depict the final time. It’s not dishonesty, it’s making the story clearer, and thereby stronger.”

How does Ross relax away from the theatre? “Ha! What a lovely idea. I don’t, really. I run a theatre company — it’s full-time, every day, every night, 70-hour weeks. I haven’t been on holiday in six years and I’m also an English tutor, so I don’t have days off. It’s a commitment and an obsession for me, but also probably why it’s still going, six years on. I fully admit this is not a healthy way to live, but I think everything would grind to a halt if I took my foot off the gas.”

What is the best advice he has been given? “The importance of having something else in your life career-wise, other than theatre. A secondary income stream. There seems to be a big focus on ‘shooting your short’ or ‘the big break’, but in reality it doesn’t work like that — not for the vast majority of people.

“Even if you get a gig working on television, in the West End, or a feature film, these things aren’t permanent in the same way a ‘normal’ job is. Even the best and most wonderful jobs end at some point, and you’re back in the casting room again.

“Everyone is going to have dry periods work-wise, or downward turns where the opportunities aren’t there. You need something else in those times, and over the years, I’ve learned two things about that. One, everyone has to do it — no matter how successful you are. And two, that’s okay — there’s no shame in it.”