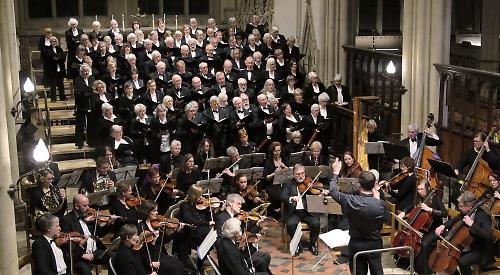 The two works performed, Grieg’s Piano Concerto in A minor and Vaughan Williams’s A Sea Symphony, were both beautiful and poetic in their own way. Despite being composed just 40 years apart they embodied very contrasting sound worlds.

Grieg completed his piano concerto in 1869 and, owing to its combination of cheery folk-like character, dancing rhythms and heartfelt lyrical passages, it has proved to be one of the most popular and well known in the repertoire. There is no mistaking the famous opening flourishes spanning from the top to bottom of the keyboard.

The soloist was Henley-based concert pianist Anita D’Attellis — no stranger to virtuosity — who demonstrated an easy athleticism in the technical passages; the cadenza in the first movement was brilliantly executed.

The muted strings in the slow movement provided a perfectly veiled background for the piano’s sparkling embellishments, while the horn, with wonderful tone and control, interacted beautifully with the soloist.

Vaughan Williams’s A Sea Symphony, completed in 1909, was first performed at the Leeds Festival in 1910, with the composer conducting. This expansive work was inspired by Elgar’s The Dream of Gerontius, composed just a few years earlier, and set the stage for a new era of symphonic and choral music in Britain during the first half of the 20th century.

The text, taken from Walt Whitman’s Leaves of Grass, uses the sea and sailors as a metaphorical parallel of a journey through life and eventually into eternity.

The music is spacious, with an underlying sense of awe and mystery, but there are moments of drama too.

Conductor Richard Laing had a real feel for the sweep of this huge work and set a forward pace from the beginning. The opening sequence was a swirling mass of instrumental colour, with strings and fanfares from the brass section amply supporting the vocal parts.

The choral sound was strong, full-toned and precise throughout. Some of the diction was lost in the early passages against the very dense orchestral textures. However, things soon evened out, with voices and players achieving a fine balance thereafter.

In the second movement, when the baritone contemplates the universe in “conversation” with the chorus, Gadd’s mellifluous voice was a sheer delight, while Paz Nieto provided more sombre, dramatic forewarnings on the drowning of sailors.

There were some lovely orchestral interludes during which the strings positively soared, while the busy brass section was impressively flamboyant in the final movement. A special mention too for leader Ron Colyer for his ravishing solos.

Richard Laing’s expertise and unflagging energy united both singers and players to produce an inspiring and moving interpretation of this great work.