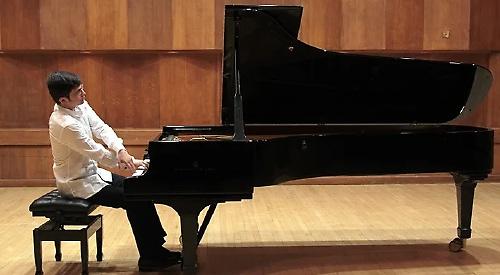 THE young pianist playing the first of this year’s series of Concerts in Caversham says he is looking forward to once again being able to have a “true conversation” with his listeners.

Ariel Lanyi’s recital on Saturday, May 22, will be his first performance in front of a live audience since December.

Currently a full scholarship student at the Royal Academy of Music in London, the 23-year-old grew up in Jerusalem, where he began having piano lessons just before his fifth birthday.

He made his orchestral debut at the age of seven and has since gone on to perform in London, Paris, Rome, Prague and Brussels.

Ariel’s concerts are regularly broadcast live on Israeli radio and television and in 2017 he won first prize at the Dudley International Piano Competition.

On Wednesday this week he played two online concerts on the same day, one for the Vancouver Recital Society and another for an audience at Kings Place, London.

The latter programme included Brahms’s Eight Pieces, one of three works he will bringing to St Andrew’s Church in Albert Road next month. The other two are Mozart’s G major sonata, K283, and Book III of Albéniz’s Iberia.

Ariel says: “These have all been records that I’ve been learning for the past year, since the start of covid. So these are the pieces I’ve been wanting to play for a long while. When everything was put off and I was back home in Israel, I decided, ‘Okay, it’s about time that I get started on learning them’.

“And, yes, it has been quite an emotional rollercoaster with these pieces, constantly thinking I was about to perform them live and then it gets called off.

“But I’m eagerly looking forward to presenting these three new works — new for me — together on stage. So that is definitely a very special occasion.” Something else that will make the occasion special for Ariel will be the presence of a live audience of human beings, however socially distanced.

“Absolutely it has an effect,” he says. “Having an audience in front of you, you see who you have to play for and know exactly who’s listening to you.

“Whereas in a stream it’s basically up to you to guess who is actually listening.

“Of course you know that some people are but nothing can replace that feeling of really having a true conversation with the audience.”

Another way in which Ariel communicates is via his blog. In one entry he discusses Mozart’s
G major sonata, which he will play in Caversham, highlighting its “subtle drama of emotion and intellect”.

Many people have asked whether music should be treated as an intellectual or an emotional experience but Areil rejects the distinction. “They’re really just two sides of the same idea,” he says. “To put it succinctly, I’d say the emotion is the ‘what’ and the intellectual is the ‘why’.

“So, you know, the emotional aspect is just somebody in the audience during a very touching moment saying, ‘Oh, wow, look how much I love Mozart’.

“And then the intellectual aspect just tries to answer, why is it? What does Mozart do in order to make us feel this way?”

Ariel’s conversation with music began at a tender age.

“I think I was about 45 minutes old when my dad played a tape recording of Glenn Gould playing Bach’s The Well-Tempered Clavier,” he smiles.

Despite this relatively early introduction to the world of classical music, he insists he was in no way hothoused.

“My parents are music lovers but I’m the only musician in the house,” he says. We had a piano at home, so it all happened very naturally. There wasn’t an official start to it.

“I was always playing around with the piano and then at some point I just started taking proper lessons. But there wasn’t a plan.”

After graduating later this year, following six years in London, Ariel hopes to make his living as an international concert pianist.

“I’ve got actually quite a lot of stuff postponed,” he says. “So hopefully by the time it restarts it will be under normal conditions.”