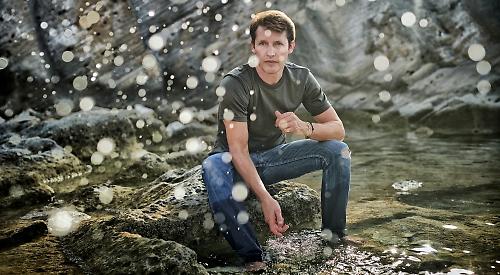 WHEN James Blunt headlines the Henley Festival this autumn, it will be his first ever visit to the town — and he can’t wait.

“I’m excited,” he says. “It feels like the end might possibly be in sight and we can actually get back to our proper jobs.”

His job, of course, being to tour the world in support of his latest album, Once Upon a Mind.

Originally released in October 2019, a Time Suspended Edition” with eight extra tracks came out last summer — around the time that the singer would otherwise have been taking to the “floating” stage.

“Well, I mean, I’m definitely in the wrong business,” he laughs. “With the pandemic the music business completely closed down and all touring stopped.

“We were just a month into what was supposed to be a world tour and we were sent home, which was obviously devastating.

“I’m in the pub business too — I bought myself a pub — and obviously that closed down, so I really picked the wrong businesses.

“That’s why it’s very exciting that we should be preparing to get out on the road again.”

Having attended prep school near Newbury and later been stationed at Combermere Barracks in Windsor as part of his service with the Life Guards, part of the Household Cavalry Regiment, it is slightly surprising to find that the 47-year-old remains a Henley virgin.

“I’ve never been but a ton of my mates have and I know the area, so this will be a first for me and I can’t wait,” he says.

Married with two sons, Blunt has homes in London, Ibiza and the Swiss ski resort of Verbier, but habitually spends a fair amount of time on the road between albums.

“I’ve had a place out here in Ibiza for 15 years now, but my home really is a tour bus,” he smiles.

“I spend much more time on a tour bus sleeping with 12 other men each night. Which, you know, if that’s your thing then it’s a wonderful experience.”

In the event, the singer was able to embrace last year’s unexpected change of plan.

“I was supposed to be on the tour for a year and I was sent home. And, you know, for me that was probably a very good thing because I haven’t spent time at home with my family, ever.

“I’ve been promising that I would take a year off from music at some stage, but I was lying, probably.

“And so this is very good — to spend time at home, do things that adults do and family people do. And so perhaps it was a blessing in disguise for me.”

Having made the most of his time away from touring, Blunt says he has recently been “writing heavily”, adding: “And I’m really appreciating that.”

Blunt’s success since he hit the big time in 2005 with the release of his second single You’re Beautiful has been a full-on rollercoaster ride.

His debut album Back to Bedlam went on to sell more than 11 million copies around the world, making it the biggest selling UK album of the Noughties.

The rest, as they say, is history.

But what not everyone might remember is that back in the autumn of 2004, Blunt’s debut single High failed to make so much as a dent on the charts, peaking well outside the top 75.

Having left the army to forge a new career as a singer-songwriter, Blunt must at that point have been wondering if it was going to happen for him.

“Well, I think I was wonderfully naïve,” he says. “And very confident that people would like the album.

“I didn’t really know the pitfalls of the music industry, which was kind of a good thing at that stage.

“That naivety saw me through. It makes you, you know, confident enough to be anywhere and everywhere with a big smile on your face, just thrilled to be in the business.

“So we did a thing called a soft release and let it grow naturally rather than with marketing, by word of mouth. And obviously it went above and beyond my wildest, wildest expectations — and the record label’s too.

“That album has been a cornerstone of my career and I’m very lucky to have toured the world off the back of it.”

You’re Beautiful remains the song for which Blunt is best known and he is clearly appreciative of the impact it made.

“I think I knew it was a really solid song and we felt pretty confident that it was the best shot at commercial success,” he says.

“But you know what? As a musician it’s not necessarily the most commercial songs which you gravitate towards emotionally.

“So, you know, with Goodbye My Lover I was much more nervous about putting it out because it’s a really deeply personal song and you really are exposing yourself and all your frailties.

“That’s the song I feel perhaps is deeper and richer. Rather than one second of walking past someone on the subway, Goodbye My Lover is a lifetime of remorse.

“And there are other songs that I’ve put out — I’ve just put out a song on this last album called Monsters for my father, who had a chronic kidney disease.

“When I realised he might not be with me for very much longer, to write a song for him, about him, and then to put it out is quite a nerve-racking moment.

“And those are songs that I’m just as proud of as the ones that might have sold lots.”

Thankfully, in the case of Blunt’s father, one of his cousins came forward to donate a kidney.

“Incredibly, he had the same name — Charles Blount donated his kidney to Charles Blount. So that was obviously a pretty serious moment.

“As they went in for the operation we had to write ‘giver’ and ‘taker’ on their foreheads to make sure the surgeons got it right.”

Such intimations of mortality seem to have had a salutary effect on Blunt’s songwriting.

“The truth probably is that all the best songs in the world are personal ones,” he says. “The ones that are just made up, you know, for the sake of making up a song, probably don’t have as much to them and don’t resonate with the audience as much. So, yeah, I’ve always tried to write personal songs.”