Pianist breaks silence in the most lyrical fashion 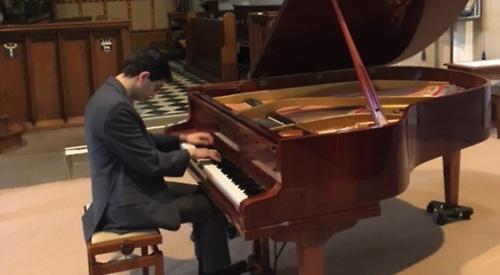 THE Concerts in Caversham series presented its first event of the season at St Andrew’s Church.

After so many quiet months, this was an exciting occasion for both the audience and pianist Ariel Lanyi.

The 23-year-old, born in Jerusalem and currently completing his scholarship studies at the Royal Academy of Music, had given his last concert in December and was eager to present an appealing selection of pieces, some of which he will be performing at the Leeds International Piano Competition in September.

First up was Haydn’s C minor Sonata (Hob. XVI/20; L. 33) composed in 1771, his only sonata in a minor mode and known for its abrupt dynamic contrasts and dramatic intensity.

The lyrical opening, a series of parallel thirds and sixths, included some lovely phrasing with noticeably smooth transitions during the frequent key changes. In the Andante con moto, Lanyi projected the elegant melody unfolding over an expressive bass line with carefully balanced poise while still maintaining its underlying and insistent syncopation.

Next up in the classical spectrum was Mozart’s Rondo in D (K485), a concert piece popular with students and professionals alike.

Composed in 1786, this charming and lively piece is based on a theme which includes a repeated “Scotch snap” rhythm. Lanyi projected a radiant simplicity here and, despite moving through various major and minor keys, kept the mood prevailingly sunny and optimistic.

After a short socially distanced interval there was a distinct shift in the sound-world as the music skipped into the 20th century repertoire of Debussy and Albéniz — contemporaries and mutual admirers of each other’s work.

Debussy once said: “I love pictures almost as much as music.” He sought to paint pictures with tones and create visions with many changes of moods by introducing ravishing new sounds and a freedom from rhythmic structures and classical forms.

In Images (book two) we really did hear the “bells through the leaves” — introduced initially by way of a simple whole tone scale and developing into a complexity of intertwining parts, which Lanyi handled with a delicate fluidity.

“And the Moon Sets over the Temple that Was” was marked by a sense of calm and stillness, the full sonorities seemingly floating in space at times, while in the contrasting “Goldfish” Lanyi captured an evocative mood of the fish darting through the water in a performance which combined brilliance with gentle playfulness.

The pulsating rhythms of the Flamenco were played with an incessant energy while sweeping passionate phrases depicted a dynamic exuberance in the Jewish quarter in Madrid (“Lavapiés”).

For his encore, Lanyi gave a beautiful account of Brahms’s ethereal Intermezzo No 3 (Op 76).

Watch out for this very special performer and watch out too for more from Concerts in Caversham — their next event is on Saturday, June 26.