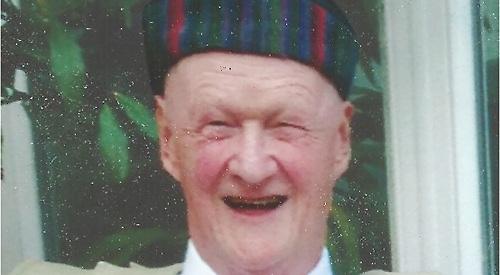 FRANK AUGUR, who died on June 27 June in the care of Sue Ryder, was born in Hemsworth, Yorkshire, in 1933.

His mother died when he was two weeks old so his aunt took him in, giving up her career to care for him.

He won a scholarship to Mill Hill. Rationing was still in force and conditions were harsh. This, coupled with bullying, made his first year of boarding very hard.

The bullying of the first year students was dealt with and his second year was more enjoyable. He was regarded as a loner and made no close enduring friendships being very shy.

Michael had the lead in See How They Run and Frank was the German Parachutist, a bit part. This was the beginning of a lifelong love of the theatre.

When posted to Hednesford he went into Cannock one evening “to see what delights were on offer”. It was then that he met Jean, his first wife. They married in 1956 and had three sons, Roderick, Nigel and Christopher.

Having had a successful career as a chartered surveyor, at one time as property director for Trumans Brewery, he retired when Jean became ill in 1993. She died a few months later.

Meanwhile, he was studying for a degree in law. He graduated in 1996, also gaining a diploma in special educational needs law. The next 15 years he was a befriender, assisting parents of children who were dyslexic.

He would negotiate with local education authorities and, when this failed, take cases to tribunal to try and secure the right provision for their needs. It was a source of frustration that he was unsuccessful in this for his severely dyslexic grandson Jake.

Frank met his second wife, Cleone, in 1993. They sold their respective houses in 1996, moved to Hart Street in Henley and married in 1997. He continued with amateur drama, joining several groups. He was memorable among many parts as Sir Toby Belch in Twelfth Night in Henley, as Joe Miller in All My Sons with Sinodun, and as Norman Thayer in On Golden Pond with Woodley Theatre.

He directed plays for the Henley Players in drama festivals. There started an institution called pre-theatre suppers. If Frank was acting at the Kenton Theatre, friends who bought tickets could come and have a meal before the show. This was great fun for all concerned.

Frank started singing lessons when in his seventies. He had a fine baritone voice and developed a wide repertoire. There were musical evenings when friends would come to hear him sing and stay on for supper.

In his eighties he competed successfully in the Ealing Music Festival. As a member of the German Circle, there were also enjoyable garden parties when they paid their annual visit to speak German and eat cakes.

His death will be a loss to all who knew him and his funeral took place on Friday, July 14 at St Mary the Virgin, in Henley.