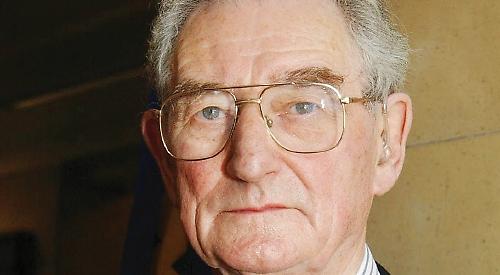 A FORMER chairman of the Greater London Council who lived in Elizabeth Road, Henley, has died at the age of 90.

Bernard Brook-Partridge, who passed away on July 28, was a high-profile Conservative member of the authority who strongly opposed its dissolution by Prime Minister Margaret Thatcher in 1986.

He welcomed the Queen to the opening of the Thames Barrier when he was chairman in 1980 but was better known for his earlier efforts to clean up the capital’s adult entertainment trade.

Mr Brook-Partridge served as chairman of the council’s arts committee between 1977 and 1979, during which time he deployed the authority’s censorship powers against Soho’s sex cinemas and clubs.

He became chairman of the GLC’s public services and safety committee in 1979 but continued his crusade despite revelations that the authority was sourcing canes for schools from a sex shop in Leeds.

He resigned from the committee later that year after admitting to a journalist that he wanted to bring the Thames Barrier’s opening date forward. However, he was appointed chairman of the council in 1980.

Mr Brook-Partridge was born in Croydon on November 4, 1927, the son of Leslie and Gladys. His father died when he was six and his mother remarried.

He attended Selsdon County Grammar School and served in the Guards at the very end of the Second World War before enrolling at Cambridgeshire Technical College, Cambridge University and London University.

He was called to the bar at Grays Inn then joined Dominion Rubber as an accountant in 1950, later becoming assistant secretary of the International Association of Accountants and secretary-general of the Institute of Linguists.

In 1972 he formed Carsons, Brook-Partridge & Co, a planning consultancy, and remained a partner until 2004.

He served as an adviser to TML, builders of the Channel Tunnel, and as director of several engineering and construction firms.

He was elected to London County Council in 1959 and to the GLC in 1967, when he also became chairman of its north-eastern planning panel. He was in opposition from 1973 but became arts committee chairman when the Conservatives took back control five years later.

During this time he halted the council’s annual £12,500 grant to the Royal Court Theatre, which staged plays by John Osborne, whom he branded “detestable”.

He was a keen supporter of the National Theatre and increased its funding to see it through financial difficulties and also supported London’s orchestras, the Festival Ballet and English National Opera.

When the Equal Opportunities Commission threatened legal action over the committee’s ban on female wrestlers, he responded: “I will not tolerate being told by any quango what the law is.” Mr Brook-Partridge courted controversy after the death in 1979 of Sid Vicious, the Sex Pistols’ bass player, saying: “Most of these groups would be vastly improved by sudden death.”

He also queried Labour’s grants to gay-friendly groups and causes, saying there was no guarantee they were not committing illegal acts on their premises, and resigned from the St Stephen’s Club in protest at its cancellation of a planned appearance by Enoch Powell.

Mr Brook-Partridge was also a member of the Poetry Society and was elected to its council in 1977.

In his entry in Who’s Who, he named one of his pastimes as “being difficult”.

In 1983 he became Conservative spokesman on policing and a few years later he criticised Ken Livingstone’s campaign to save the GLC, saying it would strengthen Mrs Thatcher’s determination, but himself lobbied 300 peers against the abolition, which marked the end of his political career.

In later decades he was variously president of the Chartered Institute of Secretaries, vice-president of the Society for the Propagation of Christian Knowledge and deputy chairman of the Central London Masonic Centre.

He first married Enid Hatfield in 1951 and the couple had two daughters, one of whom has since died, before divorcing in 1965. He married Carol Lewis in 1967 and she and their two sons survive him.

His funeral took place at St Mary’s Church in Hart Street, Henley, on Friday. Donations should be sent to the Shannon Court care home in Hindhead care of funeral directors Tomalin & Son, of Reading Road, Henley.