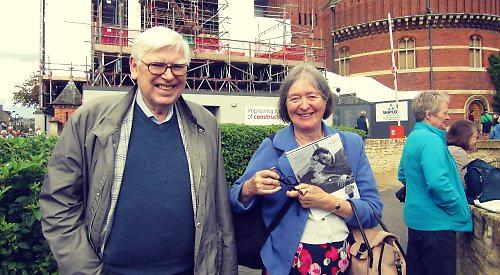 A RETIRED social worker with lifelong connections to Whitchurch has died, aged 79.

Tanya Hawley, née Ounsted, moved to the village with her husband Peter in 1974 but had links going back to the late Victorian era, when her great-grandfather Francis Bateman was the village doctor.

He practised from his home in Duchess Close, near the Hawleys’ home in High Street.

Mrs Hawley was employed by Berkshire County Council from 1975 until 1998 and was attached to Highdown School and Sixth Form Centre in Emmer Green, where she helped pupils who were struggling with various problems.

She retired shortly before turning 60, when the authority was disbanded to be replaced by the unitary Reading Borough Council and she and her entire team were made redundant. Mrs Hawley continued to serve in numerous voluntary roles, both in the Whitchurch area and further afield, until her death from a brief illness at the Royal Berkshire Hospital in Reading on Tuesday last week.

She was born on December 4, 1941, the oldest of five children, and grew up in the grounds of Leighton Park School in Reading with her mother Irene and father John, who was headmaster.

She then attended the Abbey School, another independent, before studying history at Girton College, Cambridge. Here she met her husband, a fellow history student from Leicestershire, and they were married in Reading in 1964.

Mrs Hawley began her social work career in north London before the couple relocated to Whitchurch.

She and her husband regularly worshipped at the village’s St Mary’s Church, of which she was a parochial council member during the Eighties and Nineties, and Dorchester Abbey, where she was a trustee of the friends group.

She sang for the South Chiltern Choral Society, which meets at Maiden Erlegh Chiltern Edge School in Sonning Common, for about 40 years as well as Goring Chamber Choir.

Mrs Hawley became one of the first female members of the Worshipful Company of Mercers, a charitable livery company based in London, in 2000 and served until her death.

She also ran walking groups and coffee mornings in Whitchurch, Goring and further afield and was an active member of Whitchurch’s theatre group.

Mr Hawley, 82, a retired company director, said: “Tanya was an incredibly well-known person who was involved in so many activities.

“In just two days after her death, I must have received more than 40 phone calls fondly remembering her contributions to the community.

“She was a devout churchgoer and I believe she was drawn to social work as it offered the chance to express her Christian values in everyday life.

“She liked to know she was helping the children. Some were suffering with great difficulties and it was satisfying to be able to make a difference.

“She was passionate about her work and had a great personal charm, which allowed her to build trust and do her job to the best of her ability.

“Sadly, many of Tanya’s former colleagues have died but they always spoke highly of her and she was immensely well respected.”