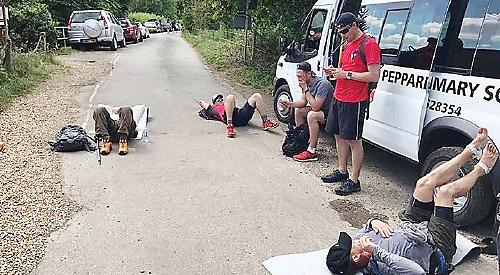 FOURTEEN fathers completed a 56-mile sponsored walk in 24 hours on the hottest weekend of the year.

They were raising money for a building with changing rooms and toilets at the new playing fields for Peppard Primary School, where their children are pupils.

The Church Lane school will eventually relocate to the site off the B481, north of Peppard Common, with a new £3 million school.

The walkers left the school at about 6.30pm on Friday after sports day and returned just after 6pm the next day at the end of the school’s summer fete.

They walked through Bix to Maidensgrove then across to Ewelme, round Benson to Warborough then down the Thames Path past Wallingford, Goring, Caversham, Sonning and Shiplake. From there they went cross country through Harpsden and back to Peppard Common.

The walkers kept themselves amused during the night by singing songs such as (Is This The Way To) Amarillo?

As they finished, they were greeted by their cheering children and many of the them collapsed and then put their blistered feet into ice baths.

Mr Cotton, 39, whose six-year-old son Noah is a pupil, said he was crying as he neared the end.

He said: “The relief that there were only a few more steps to go was overwhelming. Making my family proud of me is very motivating and seeing their faces I could see I had done that. It was probably the hardest thing I have done but it was also one of the most amazing.”

Mr Cotton, whose daughter Sienna, four, will start at the school in September, added: “It is a special place. Staff, pupils, parents and the community need it to flourish and our efforts will support that.”

Mr Gregory, whose son Jasper, six, attends the school and whose daughter Daisy will start in September, said that even years of rowing did not prepare him for the challenge.

He said: “It was far harder than I imagined it to be. Sitting in a boat all my life and becoming one of the fittest people around doesn’t prepare you particularly well for a long walk. I knew it was going to be painful but not that painful!

“We were lucky to be doing it in the most beautiful British countryside with fantastic footpaths to walk along with stunning views.

“I also loved being a part of this really quite diverse group of dads. Fourteen men started and 14 men finished. I have a huge respect for each and every one of those gentlemen!” Mr Gregory added: “I was keen to take part because I know a lot of the families do a great deal for the school. It’s a wonderful village school that my son absolutely loves.”

Mr Ferguson, 44, said the best part of the walk was hugging his daughters Clara and Georgia at the finish. He added: “The hardest part was trying to keep a steady pace because the body and mind just wanted to slow right down. I learned how important mental strength is when presented with a challenge of this magnitude.”

Mr Cima, who has one daughter, Imogen, seven, at the school and another, Rosamund, starting in September, said: “It was the hardest event physically and mentally I’ve done in over 15 years.

“The hardest part was the last 10 miles on a scorching hot day when the legs wouldn’t work properly. It appeared everyone was fighting a personal battle to keep going but the group remained in good spirits and we kept on supporting each other.” Mr Green, a 49-year-old scientist, whose daughter Ava is a pupil, said: “The walk provided an opportunity to meet up with the other fathers who all too often don’t get the chance to do that.

“The funds for the extra facilities will make a real difference to the children’s learning and activities and it will be great to see them enjoying the fruits of our labour for years to come.”

Mr Woodhouse, a strategic products manager, added: “The walk took me through lots of different emotions — excitement, worry when we got a bit lost at night in the woods, hilarious, tiring and painful. There were times when I didn’t think we were all going to make the distance, times when people looked in a lot of pain and times when we thought their bodies were telling them to stop but we didn’t.

“Seeing my family and so many other people at the summer fete welcoming us home was incredibly emotional and filled me with joy.”

Mr Waite, 39, a project director, whose daughters Astrid and Phoebe are pupils, said: “Peppard is such a great school that it deserved a helping hand.”

Mr Bowcott, a management consultant who works for the British Red Cross, has a daughter, Harriet, six, at the school and another, Thea, four, starting in September.

He said: “I attended the original concept meeting and left thinking we were joking about doing a ‘long walk’ but loving the idea of raising money for the school while doing some form of extreme sports.

“Once I realised the walk was on it was too late to back out. The reason I wanted to be involved was not just about raising money for the new changing facilities, it was about the whole school coming together.

“I have forged friendships with people I may not have met otherwise and hopefully it will also give the students positive role models and show how you can give back to others through more than just raising money.”

Mr Steele said schools were now tighter for money than ever before now so he appreciated the £7,500 that was raised.

“The walk was so different to how I had imagined it would be,” he said. “The effect of 124,000 steps on my feet, the joint pain and the heat of the sun made it a tough challenge.

“The camaraderie, the support of the community and watching others battling their own pains for the good of the children made it an unforgettable experience.

“My favourite part was the amazing greeting from the school community as we walked down Church Lane and the tears on people’s faces when they saw how rough we looked. A very close second was the ice bucket that my feet went in five minutes later!”

Michelle Whitfeld, who chairs the Friends of Peppard Primary School, said: “When we heard the dads were coming the children went down to All Saints’ Church to meet and cheer them. It meant they were able to walk the last bit with them. A lot of the men went through the finish line and collapsed.”

The group thanked the Maltsters Arms and Rising Sun for supplying their food.