‘There is a cancer in our children’s lives... if it was up to me, no child under 16 would have a mobile phone’ 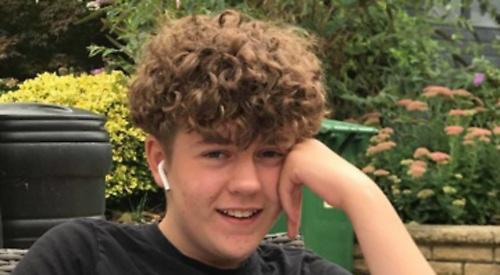 TWO teenage boys who killed another boy following a row on social media have been sentenced to custody in a young offenders’ institution.

Olly Stephens, 13, was lured to Bugs Bottom fields, near his home in Emmer Green, on January 3 and stabbed to death.

The killers, both aged 14, denied murder but were found guilty following a five-week trial at Reading Crown Court in July.

A 14-year-old girl who had admitted manslaughter was given three years and two months.

None of the defendants can be identified because of their age.

Judge Heather Norton said: “Because you are part of a youth culture that thinks knives are cool and something to be celebrated, you caused the death of another child.

“Whatever part each of you played — great or small — what you did that day was utterly cruel and totally pointless.

“You have taken one life, damaged your own futures and you have caused so much pain to so many people.

“The effects of what you did will stay with you and with Olly’s family forever.”

The judge said the sentences would seem “unbearably short” to Olly’s family, but “unbearably long” for the defendants.

He told the court: “As parents, we like to think we have the strength of character to deal with our children’s problems.

“As I held Oliver’s cold lifeless hand, begging him not to leave us, I wondered what kind of evil could lead to this happening to a defenceless child. This is a question we will be asking ourselves for the rest of our lives.”

Addressing one of his son’s killers, he said: “You might as well have stuck your knife in me, the damage you have done.”

Mr Stephens said Olly had been a son, brother, nephew, grandson and cousin and his loss was felt by his family, friends, teachers and everyone who knew him.

In her impact statement, Olly’s mother Amanda said: “People say to those grieving,‘You’re so strong, how do you carry on?’ I never understood until now. How do they carry on, how do they put one foot in front of the other?

“The day after Olly was murdered I was washing my hands in the downstairs toilet. I saw my reflection in the mirror. I looked like a ghost. I thought that I wanted to be dead. Then I thought, ‘Your family needs you, Olly needs you’.”

Mrs Stephens told how on the morning of the attack, she was sitting with her son, who was autistic, in his bedroom.

The trial heard that Olly was convinced by the girl to go to Bugs Bottom, where he was “ambushed” and stabbed to death by the boys, who both had “grievances” with him.

Jurors were told Olly’s killers had shared several hostile messages about him on Snapchat in the days leading up to the stabbing.

During the trial, the jury was shown videos and pictures of the defendants holding and handling knives.

Alison Morgan, prosecuting, described one video of the younger boy swinging a knife at the older boy as “scary”.

The younger boy said he and his group of friends had an “interest” in knives and they would frequently share pictures of them in a group chat.

He claimed the video of him swinging a knife was “clearly a joke”. The older boy had deleted 57 image files and 15 video files, including a photo of him holding a knife, which Ms Morgan described as possibly being the murder weapon.

Ms Morgan described a series of phone messages sent to Olly from the older boy the night before the murder as “threatening”.

The killers, who had known Olly since 2019, told the court they did not mean to cause him serious harm but they had had previous grievances with him.

The older boy asked the 14-year-old girl to “set Olly up” so he could humiliate him after an argument about Olly sharing a post on social media.

The younger boy said Olly had been spreading false rumours about him and wanted to “make him say sorry”.

He said that on the morning of the incident, the older boy had asked him to bring a knife to a “one-on-one fist fight”.

The pair met Olly at Bugs Bottom at about 3.30pm with the girl and three other boys who weren’t involved in the incident.

A fight started between Olly and the older boy who said he was “getting the better of me”.

Earlier in the trial, the younger boy claimed that Olly had carried knives in his waistband and would either show or tell him about them.

During the fight, he said he saw Olly reaching for his waistband and thought he was pulling out a knife so he stabbed him to defend the older boy.

The older boy said he saw his accomplice “turning red” and stab Olly twice in a space of a few seconds.

However, the younger boy disputed this and said he thought he had stabbed Olly in the upper right arm and didn’t know how the second wound to the back happened.

The victim was pronounced dead at 5pm following emergency surgery at the scene.

The killers fled on an electric scooter and proceeded to get rid of clothes and delete messages on their social media apps.

Timothy Raggatt, representing the younger of the two boys, argued that his diagnosis with a mental disorder should lead to leniency.

Rossano Scamardella, representing the older boy, argued the two defendants should not be treated the same as his client did not physically stab Olly.

He said his client had no criminal convictions and that his behaviour while incarcerated had been exemplary, that he was willingly accessing education and getting involved in extracurricular activities.

Referring to messages where the boy said he wanted to kill Olly, Mr Scamardella said: “Issues of credibility, issues of status and issues of reputation were the reasons for engaging in those ridiculous messages. His remorse is genuine.”

Kate Lumsdon, representing the girl, said she had expressed acute remorse and had been waking up at night with nightmares.

She said: “It is to her fault she lied to police but it is not unnatural of a girl who was terrified at what had just unfolded.”

Speaking after the hearing, Mr and Mrs Stephens urged other parents of teenage children to “take their phones off them”, saying social media played a “massive” part in their son’s death. They also called for new laws to be introduced to ban unidentifiable social media accounts.

Mr Stephens said: “Oliver was our sunshine and our joy, he brought love and laughter to us and so many others.

“It was an honour and a privilege to call him our son, to be his parents and to embrace someone so loving, caring and protective.

“We stand here today not victorious or celebrating but deeply saddened by the events that have led to the demise of our son.

“It started with Olly doing what he always did, standing up and protecting others and ended with a knife being thrust into our son’s body, not once but twice.

“There is a cancer in our children’s lives, it starts with the use of a mobile phone, with apps provided to entertain that are misused to spread anger, hatred, misinformation and bile, and ends in cold-blooded murder.

“Our laws need to change to protect our children. If it was up to me, no child under 16 would have a mobile phone.

“Our children deserve a carefree and happy childhood, not to spend it cowering in their bedrooms terrified or contemplating suicide because they are made to feel worthless by some random spineless individuals.”

He also called for stricter rules around the purchase of knives, saying: “In an immature child’s hand a knife is as lethal as a
firearm.”

The younger boy had pleaded guilty to perverting the course of justice after disposing of his clothes on a railway track in Reading after the murder.

He was found not guilty of perverting the course of justice by deleting social media apps from his phone.

The older defendant had pleaded guilty to perverting the course of justice after he deleted incriminating images and messages from his phone.

He was also found guilty of disposing of clothing.