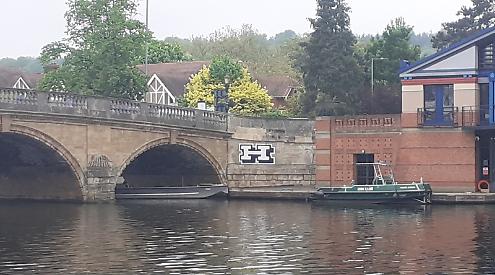 HENLEY BRIDGE has been vandalised.

A large letter “H” was spray painted in black and white on the side of the Grade-I listed structure during Saturday night.

The “tag” is on the Wokingham side of the bridge, close to the Henley Royal Regatta headquarters, and can be clearly seen from Singer’s Park and Thames Side.

This is the latest in a series of incidents in which vandals have spray- painted street furniture such as telephones boxes, bus shelters and the railway bridge in Mill Lane.

Councillors are worried that the latest attack will encourage copycats and the problem will get worse.

Mayor Sarah Miller said: “I just can’t believe it — I can’t get my head around why someone would graffiti the bridge. How low can people go?

“I just don’t understand the mentality of these people who think it is cool to do that to the bridge or any property that isn’t theirs.”

As the bridge is owned by Oxfordshire County Council, it is responsible for removing the graffiti.

Stefan Gawrysiak, who represents Henley on the council, said he had asked officers to tackle this as soon as possible.

For the full story, pick up a copy of the Henley Standard, out on Friday.