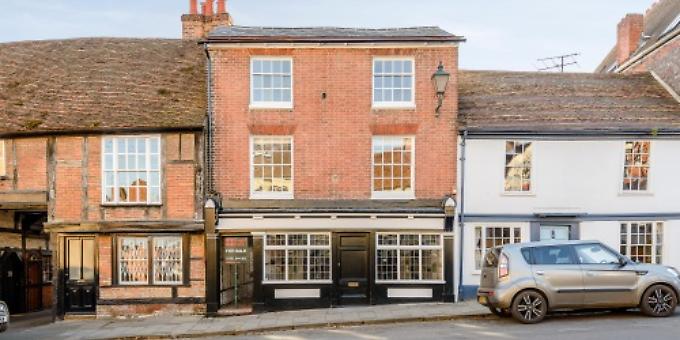 WEDGED between two listed properties on Henley’s Market Place, long-standing Italian restaurant Antico was the prime location for first dates and birthday parties with locals for more than 30 years before closing in December 2014.

Co-owner Valerio Filippini stepped away from the Italian eatery to retire and help out his wife’s business.

Eventually the property was acquired by two local lads who had had their eye on this tasty property for a while — with the idea of repurposing it.

The UK’s lack of homes has left developers targeting buildings such as police stations, shops and restaurants for redevelopment as residences, and Ben Postlethwaite and Simon Priestley decided they’d be the ones to take on 49-51 Market Place.

“This house was formerly a residence before it became a restaurant, so it made sense both financially and as a necessity, as Henley’s housing stock is so low,” says Ben.

Henley councillor David Nimmo Smith has noted that applications of this type may become more regular, saying: “We are going to accept 450 more houses. [Antico] might not be the only [restaurant] we lose.”

Ben and Simon had to jump through all sorts of hoops to get change of use, as well as complying with regulations that govern a grade II-listed building in a conservation area such as this one.

For instance, all the original sash windows had to be refurbished by hand, and ventilation had to be solved by special treatment of the walls, some of which are now covered up with specially treated plaster.

“The whole place was a disaster when we walked in to view it,” says Simon. “One of the chimneys was only really held up by some ivy, and there were gaps in the brickwork where you could see the outside. However, we loved the heritage of the building, which at one time was the public house The Cannon.”

Yes, in true Henley fashion, the building was once an alehouse, and as such a property is thought to have stood on the site, certainly from the 1400s, judging by the very wide, flat-laid ceiling joists, but probably even earlier than that. Its many different guises over the years have included a stint as a hairdresser’s.

The top section of the townhouse as we see it today was crafted in the 1880s. Local historian Ruth Gibson says: “The front brick wall has been raised to gain extra windows and attic accommodation. You can see that from further up the hill, looking down on to its gable. The roof is asymmetric — taller and at a shallower slope at the front, covered in Welsh slates, while the rear roof remains steeply pitched, with its old clay roof tiles.

“Lots of houses in Henley have this — always a sign of re-fronting, keeping up with the Joneses, and at the same time finding modest bedrooms for servants at the top.”

Since acquiring it, Ben and Simon have ensure the house is now of rock-solid construction, with complete certification from the local planning authorities.

Simon adds: “Luckily for us Antico had already opened up the downstairs to function as a restaurant and we were allowed to keep this open-plan layout, which really works well and offers plenty of flexibility. Despite the building’s age, there is plenty of light flooding through it.”

There is also a delightful brick-and-wood surround fireplace, to cosy up around in the colder months, although this will need to be flued according to whether the owners choose gas or solid fuel.

Heating throughout the house comes in the form of central heating cast-iron radiators, while the kitchen has been given under-floor heating.

Along with renovation, rewiring, re-plumbing and repurposing, Ben and Simon have also extended the kitchen and installed bi-folding doors.

Local interiors expert Katy Conroy at Adventures in Living helped with the interior colourways, while architectural firm Spratley Studios worked on helping to bring the house to life.

They also advised on how best to keep as much original flavour of the building as possible, including the ornate wood and cast iron fireplaces and exposed beams, sash windows and coloured glass panes.

All the upper floors of the property offer fabulous views over the town. This is especially true of the top floor, which houses a self-contained guest bedroom suite with bathroom.

On the second floor, the master bedroom comes with a dressing room as well as its own en suite. Of the three further bedrooms and family bathroom here, the smallest is still large enough for a single bed. This is not at all a poky cottage.

Storage-wise there is a large attic space, as well as a damp-proof cellar, which is where you’ll find the brand new heating systems (there are two).

Outside, the garden is much larger than you’d expect for a property of this size, and this, say Ben and Simon, is down to the fact that at one time there were two properties on this site — hence it being listed as 49-51 Market Place.

This also accounts for the good-sized alleyway to the side of the property, which offers entry to the house at the side as well as via the kitchen bi-folds.

“You’d probably only use the proper front door of the house if the Queen came to visit,” adds Simon.

Local designer Leon Brown at Greenlink was given free rein to landscape the exterior, and has kept all the original wall roses, as well as utilising the garden’s 18th-century mini-barn to help create permanent outdoor seating.

The barn is another handy addition and is original. It has been made weather-tight with a new roof and electricity.

Of the garden, Ben says: “Leon has done an excellent job of making the most of the available space while creating three identifiable areas — with the
200-year-old goat willow (Salix caprea) the main focal point.”

The terraces lend themselves excellently to al fresco dining, of course, much like Antico once offered here, with its protective pergola of trailing vines.

All visible flower beds and tubs have been fitted with a hidden irrigation system, too. This makes watering this south-facing area a cinch — you only have to turn on the outside tap and the job is done for you.

Parking is also an option at this property, say Ben and Simon, who are happy to explain how the land lies to prospective buyers.

“Although, to be honest,” says Simon, “both of us have thought about living here ourselves. We think the house is that good.”

It seems all that hard work has built up a bit of an appetite in them for the property.

So if you’re hungry for a bite of authentic Henley living, you’d better hurry and make a reservation. Knight Frank launches the property as sole agents today (Friday).