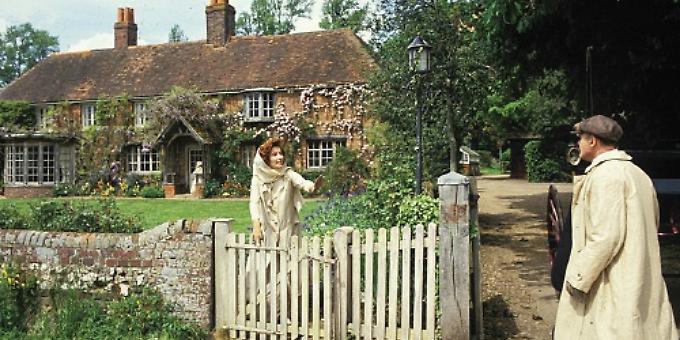 MERCHANT Ivory, the much-loved film company of James Ivory and Ismail Merchant, is responsible for many a memorable “very British film”.

Even if Edwardian England costume dramas aren’t your thing, EM Forster’s classic about love, family, and that great British tradition, property, has something for everyone.

As does the very same house where the film was shot — not really called Howards End, sadly, but Peppard Cottage.

The star of the Oscar-winning adaptation, 10 minutes up the road from Henley in the heart of Peppard Common — off the village green, of course! — has parts dating from the 14th century. And it has been home to Lynda and Eric Rothbarth since 1994.

“We fell for the house because it has great charm and a lovely atmosphere,” says Lynda as she shows Standard Property around the house, with its mellow exposed oak beams, carved wooden staircases, flagstone floors and mixed inglenook and tiled fireplaces.

“Even though we bought the place post-film, as soon as it won those Oscars we started getting passers-by taking photos.”

As well as the iconic front of the house with its bay windows, ancient wisteria and gable front porch, the inside, too, saw some action.

“They used the dining room and hall extensively, as well as the ancient horse chestnut tree in the drive,” adds Lynda, who says that eventually the family decided to plant a low yew hedge to screen the back garden from the road.

“We’d be out in the garden, which is a real sun trap, having lunch, and people would be waving at us!”

The Rothbarths raised their family of four at Peppard Cottage.

“I even had my last child in the master bedroom,” adds Lynda, who has a genuine fondness for this higgledy piggledy house that’s been such a happy family home for so many years.

For potential buyers, the semi-rural location and flexible layout, plus the opportunity for secondary accommodation accessed by a separate staircase and entrance hall are all worth a mention, but it’s really the abundant wealth of character that is the talking point of Peppard Cottage.

And yet it’s unlisted, meaning there’s potential for a sympathetic reworking (subject to planning consents).

The country-style kitchen/breakfast room is also a standout, with its oil-fired Aga and adjacent pantry and larder. In true Edwardian style, there is also a cellar.

The first-floor accommodation offers a total of nine bedrooms and four bathrooms, including a master suite bathroom with roll top bath, and a guest suite with marble washbasin.

“That was there before the last owners bought it — perhaps from the 1920s?” adds Lynda.

This is a charming, magical property with many a tale to tell and even more to make. It’s something money can’t buy — pure class. Just like Howards End.

ONLY CONNECT... WHAT’S EM FORSTER’S CLASSIC ALL ABOUT?

EM Forster’s Howards End explores the changing landscape of social and class divisions in turn of the century England through the prism of three families — the intellectual and idealistic Schlegels, the wealthy Wilcoxes from the world of business, and the working class Basts.

In the film version — pictured right — not only is it the acting which sets it apart from other adaptations (acting masterclasses from Anthony Hopkins, Emma Thompson, Vanessa Redgrave and Helena Bonham-Carter) but the script is dazzling, too.

It will be a hard act for Manchester by the Sea director Kenneth Lonergan to follow. The four-part adaptation from the BBC/Starz, stars Hayley Atwell as Margaret Schlegel and Matthew Macfadyen as Henry Wilcox.