Design expert's home was graced by titans of ballet 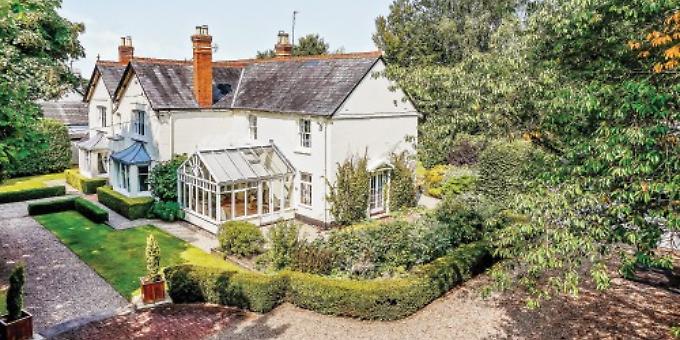 THIS week’s prime property is a £1.65million masterpiece that’s been a labour of love for its owners — as well as having a rich history as an unlikely bolthole for ballet dancers and defecting Soviets.

Crays Pond House is a beautiful five-bedroom home, named after its location in an Area of Outstanding Natural Beauty close to Woodcote and Goring.

But the property is also likely to have more than a passing interest for fans of ballet.

“Rudolf Nureyev used to practise his barre work in the garden,” says current owner Jane Butcher, 49, who works as an interior specialist and design expert.

Once a collection of 19th century cottages incorporating the village bakery before being turned into a single residence, the house was bought by Russian ex-pat Paklusha Bicat and her theatre set designer husband in 1947 — for the princely sum of £5,000.

The couple lived here very happily, with their three children for some 40 years. But missing their city socialising they would often invite friends and associates to their rural getaway — including Paklusha’s fellow ballerina Margot Fonteyn.

“The house had lots of small rooms, which worked for the many guests the Bicats had,” says Jane Butcher, who bought the house 17 years ago with her husband Stephen, 55, who is managing director of a software company.

The Bicats planted a mature yew tree hedge in the garden to conceal Nureyev while he was practising his moves, but as Jane says: “We removed it during the landscaping work.”

It was during his period as principal dancer with the Royal Ballet that Nureyev was introduced to and became a close friend of fellow ex-pat Paklusha. He would stay at the Bicats’ home many times during the Sixties and Seventies.

Nureyev is said to be the first Soviet from the arts world to defect to the West, paving the way for other ballet stars such as Mikhail Baryshnikov.

“Paklusha was friends with everyone and anyone of importance — it wasn’t just Nureyev who came to stay,” says Jane.

The house was an enclave and it saw comings and goings from Russian people of note, including politicians, some of the leading economists of the day, as well as displaced ex-pats and friends from the Royal Ballet.

The house is now on the market for only the third time since the Second World War — the Alfreds family having purchased it from the Bicats, reconfiguring it further during their 13 years at the property.

Jane and Stephen bought it in 2000. But today’s Crays Pond House is a very different offering to its many previous guises.

On paper, the house, which is set in a plot of just over half an acre, offers five bedrooms, three bathrooms, a triple garage and six — yes, six — reception rooms.

What is not apparent is how the house has undergone an exceptional internal transformation under the guidance of interiors and design expert Jane.

Along with a re-plumbing and a
re-wiring, the configuration of rooms has changed entirely since its days as a Bloomsbury-like bolthole.

Now not only is Crays Pond House a good-looking house with a perfectly manicured high-spec garden on the outside, but it is light and airy with well-proportioned rooms on the inside.

“When we bought Crays Pond House it was still a rambling mish-mash and the garden was an overgrown jungle,” says Jane. “The cottages had been built around 1820 but the rest of it had a Victorian or Edwardian feel. So that’s what I picked as our chosen style when remodelling.

“We had to step back and knock all the innards apart and reconstruct it entirely, while putting the soul back into the property.

Gesturing towards the grand and spacious hallway with its sweeping solid oak staircase, she adds: “None of this was here.”

In fact, Jane says the family — she and Stephen have two adult daughters — had to live in a building site for their first two years there.

“My youngest was just six months old when we moved in. She didn’t know what carpet was until she was three!”

The oldest part of the house is the drawing room, which used to be the local bakery. This has polished wooden floors and a large fireplace which has been created using the flue from a neighbouring room.

“We wanted a focal point for the drawing room — it needed a feature fire. But there was no chimney. The solution was to use the chimney of the fire in the room behind it,” explains Jane.

Indeed, she’s a woman who knows a thing or two about design, décor and tricks of the trade.

In the hallway, she ensured that the edges of the beautiful new parquet floor were hidden by attaching very thin pieces of skirting board to the walls. This gives a sharper, neater finish than would have been achieved by simply adding beading.

Likewise, around the bottom of the beautifully carved staircase, which is adorned with hand-carved acorns, Jane insisted on cork infill to disguise the edges — without ruining the look of the bottom step.

Once the room configuration and floors were done, it was time to focus on the smaller details, and put the character back into the house. Ornate mouldings were copied from a small existing panel and coped throughout.

Jane says: “Where details were missing, we added. Where there was a mess of style or era, we picked one and used it as a template for elsewhere, to make it all work together as a whole house.”

Thus most internal doors are brand new. “We picked one door — that of the original Victorian downstairs toilet — and told the carpenters to copy it for all subsequent doors. Even the hardware is the same throughout.”

Eventually, Jane turned her attention to the exterior. Both front and back gardens are exceptional, with an array of picturesque shrubs and flowers. An automated irrigation system makes keeping plants and grass watered a cinch — even during a drought — thanks to harvested water.

The garden is also completely secluded from neighbours thanks to cleverly placed mature trees and hedging.

From its time as a row of Victorian cottages, the house still has its original well in the front garden — now covered over. It would be easy to re-establish this if the new owners should wish it.

“It disrupted the approach to the front door, so we decided to hide it under the reclaimed York paving,” says Jane.

Even though the house was “finished” long ago, it has remained Jane’s long-term project.

“A house of this size and age needs constant maintenance,” she says. “The windows are painted every five years. And to stop rooms getting tired I pick one to give it a makeover every single year.”

This year, it’s the turn of the aforementioned office.

Also part of the master suite, there is an adjacent walk-in wardrobe which is an amazingly well designed space and probably the largest dedicated walk-in that Standard Property has ever seen. Clothes horses take note: could this be a reason in itself to buy Crays Pond House?

“Since I created the dressing room for myself and my husband, we wear all the clothes we own,” says Jane. “I can see everything — tops, dresses, shoes — at a glance, which means I don’t end up wearing the same old thing. The wardrobe is just one of the many things we’ve adapted over our time here.”

As the needs of Jane’s family have changed, so the house has had to change with them. What was once a workshop is now a gym. What was once an office has become a high-tech entertaining snug with super-fast broadband.

And in the garden, which is laid out in usable sections, what once was the children’s trampoline and Wendy house is now a functional space for entertaining. This immaculately presented area offers a stunning feature fire pit (gas-fired) and extensive seating.

The family room was once a playroom, but Jane thinks this would suit being properly incorporated into the kitchen/skylighted dining area as part of a kitchen extension.

In fact, although the house has seen plenty of building action internally, it has never been legally extended.

Stephen Christie-Miller, director of residential at the Henley branch of Savills, which is marketing the property, thinks Crays Pond House would qualify for planning permission to extend.

Owners can apply for a general development planning order (GDPO) to extend a detached dwelling by up to eight metres to the rear if it’s a single-storey extension you’re after.

It means you could create the most beautiful family/dining/kitchen area.

Currently, the kitchen is the lovely, inviting hub of the house, having spotless Shaker-style units and an oil-fired Aga, as well as a secondary five-burner gas oven and a granite-top island.

Other features of Crays Pond House include a “hidden” wine cellar underneath the drawing room, accessed via a trap door, and a triple garage which doubles as an (alarmed) tack room. (“We keep horses, locally,” adds Jane.)

There is also a south-facing conservatory which has lapsed planning permission for conversion into an orangery — as well as an electric five-bar wooden gate leading to the large drive which offers plenty of space for parking.

Although Crays Pond is a hamlet, it’s full of families, and offers easy access to good state and private schools, including Woodcote Primary School and The Oratory School. There is even a bus stop within 100 metres of Crays Pond House, which can take you to most schools.

Stephen Christie-Miller adds: “Crays Pond House is surrounded by a number of highly regarded schools such as Moulsford Preparatory School and The Oratory, which happens to be within walking distance of Crays Pond House.

“Goring and Pangbourne are both very nearby with excellent train communications to London, which will satisfy any commuter-driven buyers. The area is a particularly sought-after part of the Chilterns and we see consistent demand year round from a variety of buyers.

“We expect interest from all over for Crays Pond House, including Londoners moving to the country and local interest, as well as commuters and families moving for good schools.”

Jane says she prefers to commute from Reading (10 minutes in the car to Reading train station with trains to London Paddington in 29 minutes), and husband Stephen says he even cycles it in 20 minutes.

“There are lots of families here and we will miss the community of the hamlet greatly,” says Jane. “We’ll miss the entertaining, too — just like Paklusha and Andre.”

The couple’s next move will be abroad.

“My youngest has known no other house than this,” continues Jane, who says she will sorely miss this warm but spacious house — a testament to her skills and a masterpiece of a welcoming and functional family home.

Crays Pond House is for sale with Savills. For more information or to book a viewing, call the Henley office on (01491) 843000.