Riverside home built with an Egyptian theme throughout 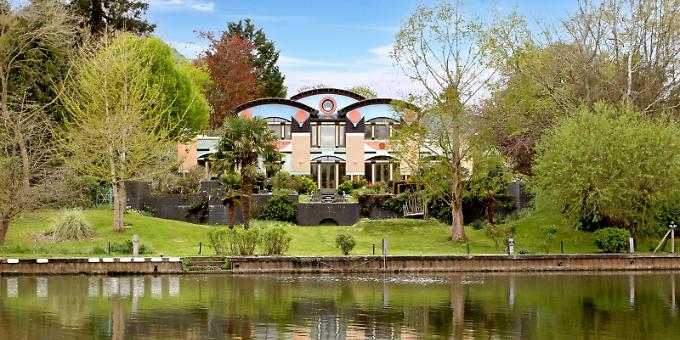 SPHINX HILL in Moulsford, known locally as “the Egyptian house”, is on the market.

The property belongs to Christopher McCall, a barrister and self-confessed “Egyptomaniac”, and his wife Henrietta, who is an Egyptologist and author with a special interest in revivals of the ancient world.

The couple plan to downsize and move into central Henley, which means saying goodbye to the dream home that was built for them in 1999.

Sphinx Hill was the brainchild of renowned postmodernist architect John Outram, who is famous for his colourful and decorative creations.

The Isle of Dogs Pumping Station in Docklands, for example, has been recognised as a postmodern masterpiece and awarded with Grade II listed status.

Although their house was clearly inspired by ancient Egypt — the land of the pharaohs, pyramids and dynasties that evolved over 3,000 years — the McCalls gave Mr Outram a fairly relaxed design brief.

“We gave him very few restrictions,” says Mr McCall. “We just asked him to use his own imagination, which is incredibly fertile, to do what he thought would be right for people who are interested in what is technically known as the Egyptian revival.

“The inspiration was John’s, we didn’t give him very strong instructions, it just developed. He put in an awful lot of things that were from his own imagination. It was such fun working with him.”

The McCalls found the planning department at South Oxfordshire District Council to be very supportive of the building project.

A hand-picked team of builders, designers, craftspeople and suppliers worked together to construct something totally unique. Although the finished home is exceptionally elegant and highly decorative, the materials used in the build were quite basic.

Mr McCall says: “It is concrete block covered with cement render, which is through-coloured. It isn’t a painting job; the render keeps the colour. It is something that John was very keen on and we are so thankful for it because it gives quite a nice granular finish to the walls.”

A beautiful palette of rich tones was developed for the render on the walls — mostly reds, greens, blues, yellows and blacks — and this harmonious colour scheme runs through the house.

In keeping with old Egyptian architectural traditions, the house has a symmetrical layout and faces the river.

More than 2,000 miles away from Sphinx Hill’s place by the Thames, the River Nile is punctuated with cataracts, shallow lengths of water where the surface is broken by rocks and boulders between Aswan in Egypt and Khartoum in Sudan.

The McCalls were keen to have a representation of this natural phenomenon in their riverside garden and this is what greets you as you walk through the front door and entrance hall and into the dining room.

“The point of the waterway is actually quite symbolic,” says Mr McCall. “We decided we should have a number of cataracts and sphinxes, which were the guardian angels of Egypt.

“You look directly through the house down a channel of water, which goes over three waterfalls down to a pond at the bottom, which looks out over the Thames.”

On one side of the ground floor is the kitchen, which is fitted with integrated appliances, a larder and a large island in the middle. In the swimming pool pavilion on the other side, you can imagine yourself being on holiday or enjoying a day at the spa — there are glittering blue and gold columns, black tiles under the water and a midnight blue vaulted ceiling.

There are also two studies on the ground floor, one of which could potentially be repurposed as a sitting room, playroom or spare bedroom.

Upstairs is the main living room. “It was built on the first floor partly for design reasons but partly because it gives a very good view over the river,” says Mr McCall.

There are more free-standing columns in the living room that function as uplighters and a pyramid-covered fireplace in the middle.

The master bedroom suite occupies one wing of the first floor, stretching from front to back. It has a dressing room, mosaic-tiled bathroom and a roof terrace. There are two further bedrooms and a family bathroom upstairs.

The formal gardens match the house in terms of symmetry, elegance and grandeur, with pools and sphinxes, lawns and a terrace. “I’ve been keen as a gardener over the years and we’ve got roses and peonies, salvias and magnolias,” says Mr McCall.

“My main aim was to make it an all-year-round garden, so we have a lot of snowdrops and hellebores in the winter.”

The house is in an elevated position. Beyond the gardens there is a grassy verge that slopes down to the river and opposite there is a flood plain with far-reaching views of the surrounding countryside.

There is a garage, plenty of space for parking and a 65ft mooring for a boat.

Sphinx Hill is simultaneously a comfortable family home and an extraordinary work of art created by one of the UK’s finest architects.

Situated on Ferry Lane in Moulsford, between Wallingford and Goring, the property is on the market with Knight Frank at a guide price of £2.5 million.