Swimming helps me cope with pain 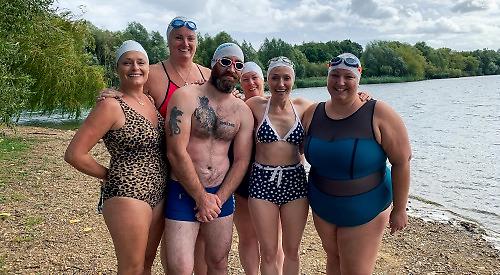 A WOMAN from Henley has told how open water swimming has helped her cope with chronic pain.

Music teacher Laura Reineke suffers from fibromyalgia, a long-term condition that causes pain all over the body.

There is no cure but exercise can help to ease the symptoms.

Mrs Reineke, 48, has suffered with it since 2018 but found that when she went swimming it helped her to cope with the pain.

She is a member of the Henley Open Water Swimming Club and one of five women from the club known as the Henley Mermaids who recently completed a relay swim across the Channel in aid of Henley Music School, which she founded.

Mrs Reineke, who also does Pilates to help ease her symptoms, said: “It is widespread chronic pain and swimming really helps with your mindset. If you’re having a bad day it is perfect.

“Swimming is also about the friendships. It is about being out in the open with the wildlife and all your friends. You meet people from all walks of life and I have made friends for life doing it.”

Mrs Reineke, a mother of three, believes her problem may have started after she ran the London Marathon in 2018 to raise money for Parkinson’s UK.

She was told she had a bulging disc in her back. “I just had ongoing pain that wasn’t diagnosed and they did tests for all sorts of things,” she said.

After contacting the swimming club, she became “completely addicted” to swimming in the River Thames in all weathers.

“People think when they are in pain that they shouldn’t exercise but that’s not true,” she said.

“You have to start off slowly and build it up. Gradually, as your body releases endorphins, you start to enjoy it and get into a good routine.

“It is all about the strength of mind. When you are in pain, you’re not sleeping properly and you’re getting really grumpy and miserable. You go and get in that river and everything will be better again.

“Even if the pain doesn’t go, swimming distracts you from it and you can roll with it rather than be stuck with it. You feel alive — that is it in a nutshell.”

Mrs Reineke, who lives in Berkshire Road, spoke about her condition in a recent episode of Channel 4’s How to Beat… series. Each episode focused on a different health issue, such as stress and ageing, and involved volunteers who agreed to try alternative methods to manage their pain rather than traditional medication.

Mrs Reineke agreed to appear on the programme after being asked by journalist Ella Foote, who is also a member of the open water swimming club.

They were filmed swimming in Bray Lake in October together with presenter Kate Quilton and a man called Mike who suffered from chronic migraines.

Mrs Reineke said the water wasn’t too cold but Quilton’s teeth were chattering when she got out of the water.

Mike said it helped to manage his head pain and he had continued open water swimming since the filming. Quilton said regular exposure to cold water could increase antioxidant levels in the body, which is thought to reduce the risk of heart disease and cancer. It also reduces inflammation, which would help people with migraines.

Mrs Reineke said: “I loved the experience of being on TV — it was something very different and I like doing different things.”

Two of the other volunteers with fibromyalgia, Erin and Asif, were asked to try tai chi as a method of coping with their pain.

The episode, which was broadcast on August 11, was originally due to air in March before the schedule was changed due to the coronavirus pandemic.

•The Henley Mermaids achieved their target in 17 hours and 43 minutes and raised more than £27,000 for the music school.