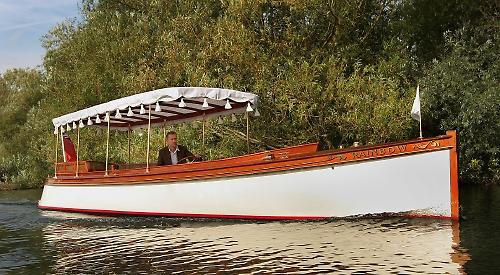 HOBBS of Henley has sold one of its two boatyards on the River Thames to a private collector.

He will bring together a small number of his own craft and those from the collection of William and Penny Rose, of which he became custodian in 2011, to form the new Rose Toop Collection.

The Roses began acquiring and restoring their boats in the late Sixties and were honoured in 2007 by the National Transport Trust for their commitment to preserving the river’s boating history.

It’s hoped their craft will be transferred to their new home within the next two years, once the main building has been made more secure and refurbished to offer extra protection from the elements and extreme temperatures.

Interior work will start this summer as long as the coronavirus outbreak subsides.

The boats will not go on public display but some will be out on the water during the summer. Recognised clubs, societies and fellow enthusiasts will be allowed to view the collection by appointment.

Mr Toop, who lives in Richmond and owns a property in Wharfe Lane, Henley, says the scheme will support businesses involved in restoring, preserving and maintaining traditional river craft. He intends to refurbish the yard and improve the facilities for the commercial units which are leased to various marine-related ventures, including the engineering firm G Mech Marine.

Hobbs has kept a 25-year renewable lease on about a third of the land and will continue offering storage services under a covered barn near the northern boundary.

Its pleasure boating operation on the opposite bank, off Station Road in Henley, is not affected.

Mr Toop plans to create a small number of moorings which owners of traditional day boats will be able to rent from next year.

He says there should be demand because no other sites on the Henley reach also offer secure parking and toilets.

There will be a charge but Mr Toop says this reflects his “significant” investment in the scheme and it will never be run for profit.

Plans also include a free launching facility for related clubs such as the Thames Traditional Boat Society, which promotes the use of non-powered craft including skiffs, gigs, dinghies, punts and canoes.

Mr Toop, who is married with two children, built his career in the telecommunications industry, launching his first company when he was 21. He sold that two years ago.

He has been collecting classic boats and visiting Henley during the royal regatta for more than two decades. He first exhibited at the Thames Traditional Boat Festival in about 2000 and became chief judge in 2016.

The festival’s co-chairwoman Lady McAlpine, of the Fawley Hill estate, invited him to share the role in 2017.

Mr Toop first hoped to buy a riverside house in Henley with space for his boats but says the collection “outgrew” his plans so he bought the Wharfe Lane property in May 2018 and began looking for storage nearby.

He approached the Hobbs family, who have run the business since 1870, in 2019 and discussions were held on and off for about a year before the sale was agreed through estate agent Ballards, of Hart Street, Henley.

“The timeframe for finding the perfect site was far longer than I’d expected,” said Mr Toop.

“We realised we were going to struggle in many locations which were otherwise suitable because we needed to construct a large enough building to house everything.

“The Hobbs yard wasn’t on the market but it was the dream option for us. It’s an eight-minute paddle from Wharfe Lane, it’s on a reach of the river at the very heart of everything and the main building offers an exceptional internal space to store and display the collection. Additionally, the vibrant, small businesses which operate from the site ensure it remains relevant and will offer invaluable services to the local community.

“We were in dialogue with the family for some time and although our initial exploratory chats didn’t come to anything, a deal was eventually struck.

“I’m delighted that the Hobbs family will retain a presence on the site and I have committed not to compete with them, whereas many other buyers would have been looking to do so.

“It will remain a working boatyard and will do all that I can to assist the existing tenants by improving the facilities available to them.

“The boatyard is highly visible from the other side of the river, so it should look like a suitably treasured asset that befits Henley.

“I’ve also spoken with the River & Rowing Museum, who are very supportive of what I’m doing and consider the plans to be complementary to their valuable work. This is not a commercial undertaking and never will be. It will bring a lasting benefit to the town and the charge for moorings will simply help to offset the considerable expenses while allowing free access to the river for others.”

Mr Toop said it should spark interest in the vintage boating world.

He said: “The Thames Traditional Boat Festival is a very special gathering which inspires the restoration, preservation and maintenance of these important craft.

“It also brings new owners into the fold and all these people invest money into boatyards and other businesses. It therefore saves specialist skills which need to be saved and preserves some incredible boats which should never be allowed to disappear.

“However, it’s just one weekend and there isn’t yet somewhere which can inspire potential clients all year round, which we hope the Rose Toop collection will become.

“It won’t be open to the public but it should excite the traditional boat community and encourage them to pursue their own restorations.

“Henley’s landscape is greatly improved by the presence of beautiful, small wooden craft enjoying the river, which I’m sure most people prefer to see rather than large fibreglass craft designed for the sea.

“This is about fostering and supporting anyone who wants to become involved in classic boats, particularly younger people.

“I don’t have Lottery funding or corporate sponsorship, so I will need to box smart as to how I make it work. I’m really excited and a little nervous — not in a negative way, but more like a sportsman feeling the pressure to perform.

“I’m determined to create something really special which the people of Henley can be proud of.”

Jonathan Hobbs, managing director of Hobbs of Henley, said the firm would invest the proceeds from the sale in improving its moorings near Red Lion Lawn, off Thames Side, and the Thamesfield moorings opposite.

He said: “We weren’t looking to sell before the pandemic but during the first lockdown negotiations progressed towards an attractive deal which could secure our financial stability.

“The sale and leaseback of an asset is sometimes too good to turn down. Bearing in mind the current situation, as a hospitality business, I imagine we’ll be struggling for the next few years.

“It was very important that the Wargrave Road site would remain a working boatyard as we wanted the existing tenants to have the security of being able to continue.

“The deal has given us an opportunity to improve and enhance our own facilities and build a better future while Adam will get a wonderful undercover facility for the boat collection.”