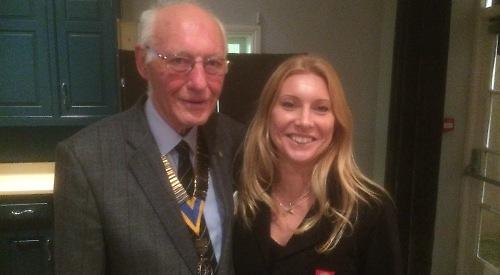 THE Rotary Club of Henley Bridge had two interesting events at their meeting on October 23.

One was the induction of a new member, Tim Fundell, and the other was a talk by Lynne Lambourne about interior design and upcycling.

The club is delighted to welcome Tim as a member. A proud Welshman, he lives in Henley and his business is financial services software. He has two children, Billy and Otilie, and a very affectionate terrier called Pepper.

On joining the club, Tim said: “I am delighted to be joining the Rotary Club of Henley Bridge. The other members have been exceptionally welcoming and it has been a lot of fun.

“The club has been impressively productive in terms of fundraising for local and international projects and the most worthy of causes — far more so than I had ever realised.”

Probably the two main highlights were the Henley half marathon, the club’s flagship annual fundraising event, and the major news last month that, following Rotary International’s 30-plus years of commitment to the eradication of polio as its main global charitable cause, the World Health Organisation has concluded that wild poliovirus type 3 (WPV3) has been eradicated worldwide. This is not just a great achievement for the club and for Rotary International but also humanity. It is truly awesome.

The club has had some extremely interesting speakers on a variety of subjects at our Wednesday evening meetings, including the geology of Iceland, the history of Bletchley Park and the “Blood Bikes” charity.

There have also been numerous social events, including golf and bowls evenings. Lynne Lambourne is a Sue Ryder Women of Achievement Award winner, a “warrior on waste”, children’s educator and interior designer who has an upcycling business.

She also talked about her concerns that we have become used to many disposable items going into landfill when they could easily be turned into interesting and usable objects.

In 2017, Lynne was named Grand Designs interior designer of the year for room sets she created at Grand Designs Live on an upcycling and sustainability theme.

She has used her knowledge of upcyling and love of children to help educate the next generation to hopefully take better care of the planet.

Five years ago, she started a movement called Warriors on Waste. She runs after-school clubs and holiday boot camps and gives talks to schoolchildren, encouraging them to think more about society and waste.

Lynne believes that making small changes to everyday life could help save the planet.