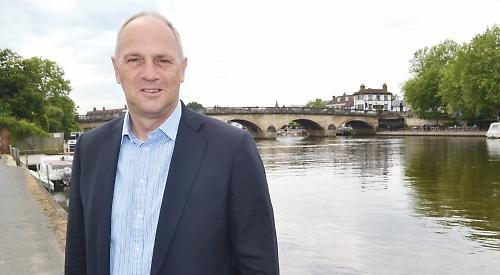 THE decision to cancel this year’s Henley Royal Regatta was not taken lightly.

It was the first time it had happened in peace time, which is why the organisers have made contingency plans for next year.

It will be a ground-breaking year for the event as it will take place over six days for the first time in its 181-year history to allow time for additional women’s races.

This means it will start on the Tuesday in order for the traditional finals day to take place on the Sunday.

The committee of management is considering how it can run the event next year amid uncertainty about a return to normality due to covid-19.

One possibility is staging the event without international entrants so that it just comprises British crews. This would happen if international travel was restricted or made harder by quarantine periods.

Another is holding the event “behind closed doors” without spectators even if it would only be possible to prevent people from watching at part of the course.

Sir Steve Redgrave, who chairs the committee, said: “Obviously, we’re in a lot of unknowns.

“We’ve started our planning because in not having the 2020 regatta we’ve got time to think about next year when this week we’re normally absolutely snowed under.

“We’re now evaluating the strange times and situation. We don’t know what social distancing is going to be in place, if there’ll be a vaccine for covid-19 and what restrictions we may have.”

He has spoken to his colleagues about what they would do if the unthinkable happened, such as a second outbreak of the virus.

“If the regatta doesn’t take place obviously there will be a very good reason for it and one that we don’t want to see,” he said.

“We’re planning for a six-day regatta but with the unknowns we have to go through all our due diligence as a committee to make sure that’s the right thing to do next year.

“Avoiding a second bout is crucial. Sport has been devastated but we’re planning for a full regatta. The worst scenario is cancellation. The best scenario is to be able to run a six-day regatta with full crowds and competitors.

“We have crews coming from round the world each year. Our biggest overseas entry comes from America. What situation are they going to be in?

“So far we’ve looked at the cancellation and that’s the easiest and hardest thing to do. Could we do an event behind closed doors? I think that’s very difficult because we don’t own all the ‘doors’.

“We are monitoring on a daily basis as the Government makes its changes to the lockdown and the consequences of that. February is the sort of cut-off where our expenditure really ramps up ahead of the event in July.

“You can’t say in February ‘oh we aren’t going to have an event’. People will have been preparing and training so it just has to be monitored.

“In September, when the winter training starts, we want to know what we’re aiming for in July.”

Sir Steve said the event next year would be difficult to run if social distancing was still in place because of the nature of the spectators’ enclosures and close proximity of the crews.

“Even if that changes to one metre it is still pretty difficult. We’re not a professional sport like football with the finance to be able to push the boundaries of what the rest of society is doing.”

Half of the income used to hold the regatta comes from membership subscriptions and the other half from their wining and dining during the event.

If people are unable to attend and spend their money, this will put financial strain on the regatta and raise questions about its viability.

Sir Steve said: “The finance to run the regatta does come from our members and a lot are 50-plus, so the recommendations at the moment are that people in that age group and 60-plus should be extra cautious.

“If those people decide for their own health reasons that they’re not going to come to the regatta then we don’t have the revenue. We have to seriously consider what the rules might be in a year.

“We know that viruses tend to pick up in the winter. We’re in the middle of summer now and we know the lockdown has opened up in America and a number of their states have really struggled with high numbers of cases again.

“From a social point of view, I hope we’re not in that situation once our lockdown begins to ease.

“Paramount are our competitors, our members and guests. They will be at the top of our decision list of whatever we do, of course.

“We hope they turn up to the regatta, wine and dine and enjoy themselves because their attendance is absolutely crucial.”

Forecasts suggest the regatta will suffer an operating loss of up to £500,000 this year, taking into account the income received from members’ subscriptions, which total about 7,000.

Many seem to have accepted the decision to cancel this year’s event but are still disappointed.

Sir Steve said: “We’ve had good correspondence from a lot of our members, who are saying it was the right decision to make but how sad they are.

“They pay their subscriptions every year and that is non-returnable because of this sort of situation, even though the regatta has never been cancelled apart from in two world wars.

“Obviously they’re bitterly disappointed, as we all are, but they’re saying ‘we know it had to be cancelled this year but we will be back again next year, God willing’.

“Some of our members who paid for car parking spaces for the five days have told us to keep their money even though we offered to refund it.”

Competitors would also be upset to miss their chance to race at
Henley.

Sir Steve said: “The whole of world rowing has been devastated. Schools and universities have probably been hit harder than others. There hasn’t been a summer regatta at all.

“Some of the long distance races got cancelled in March and no side-by-side race has happened at all and isn’t going to happen this
season.

“British Rowing is hoping to get clearance to bring some sort of normality back to racing in the winter but at the moment social distancing is a problem.

“With it, teams haven’t been able to train as they normally do, including national squads, and there’s no Olympic Games, which would have been happening in about four weeks’ time. At the beginning of June individuals were told they could go out in single sculls. If it’s a family or people living in the same house then you can go out in a pair or double.

“Rowing is a training sport and we train to race and if there’s no races the motivation required for training becomes harder but since the lockdown started to ease up slightly you’ve seen a lot more people out single sculling than we see normally because people have missed being out on the water.

“What cricket has done and what snooker is doing is bringing everyone together. Individual crews possibly could self-isolate together and train. Germany has opened up its training and the national team is training but staggering this throughout the day.”

After this year’s experience, the committee has considered purchasing insurance.

Sir Steve said: “We’ve not needed insurance because in more than over 181 years of history we’ve never been cancelled apart from during the world wars. Running the regatta in those days was also a lot cheaper. That situation has changed.

“The premiums would have been very high for a number of years for an event that never gets cancelled. So even though it has cost us for not having any insurance we’ve saved money over the years.

“What we have to evaluate now is, is it worth having cancellation insurance of some sort? We’re not bathed in finance.

“We’ve got a fair amount of reserves so we could cope with two cancellations of the regatta back to back but three and we would be really struggling.”

The regatta has not taken any Government support grants during the lockdown but the temporary staff have been furloughed.

Sir Steve said: “We take on more and more staff as we come up to the regatta. Our badges go on sale to our members on May 1. We had put in place the teams doing the members’ packs — 7,000 of them that go out around the world.

“It takes a long time to pack up all those individually, box them up and send them out. We have a part-time staff for that and they were all done before the lockdown and the cancellation.

“We did furlough three of those people because they were scheduled to be working right the way through to the regatta.

“Usually by the time we reach July we have hundreds of part-time workers. I would hate to guess the number. Our professional staff all-year round is about 10 and they have been working remotely.”

Many of the regatta’s contractors have suffered because their main source of summer business was called off.

Sir Steve said arrangements had been made with all of them to help them through the year.

He said: “We have a long-term contract with a lot of our suppliers and we were able to come up with agreements that suited the organisations. We wanted to keep them afloat.

“Each one is in a different situation but we have a contract and liabilities with all of them. They don’t want us to go under and we don’t want to see them go under.

“We want to make sure we’re all able to stage the regatta next year and some of our contractors have been working with us for generations.”