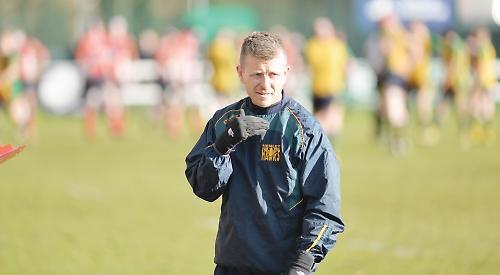 THE head coach of Henley Hawks says his side must tighten up in defence if they are to achieve their target of a top-six finish this season.

Pete Davies says the number of points shipped last term was behind the team’s failure to mount a challenge at the top end of the table, despite an impressive scoring record.

He has now personally taken over defence coaching at the club after former coach Danny Batty left to join rivals Redingensians Rams, who the Hawks face at Dry Leas tomorrow (Saturday) in their opening game of the league season (kick-off 3pm).

Davies says that after “finding their feet” in National League 2 South last term following relegation in 2016, the team is ready to perform better this year.

He said: “The senior players and management sat down as a group at the start of the season and we said that this is part of a three-year cycle, where this is the second year.

“Last year was about consolidating and getting our feet back and this year we are going to build further. A top-six finish is the aim and we will look where we are at the end and make our plans for next season.

“Danny Batty has gone to Redingensians and I’ve taken over the defence. If we can improve the number of points we concede but still maintain our attacking formation we will get more points and be further up the league.”

Davies says he takes confidence from a strong finish to last season, where Hawks won six of their last 10 games. He said: “The key thing is we finished the season exceptionally well. The players we brought in were very young and inexperienced and they struggled to find their feet at that level.

“After Christmas they were up to speed and more comfortable and we finished strongly. We have been lucky enough to keep the vast majority of our squad from last season and there is only one player in the squad at the weekend who hasn’t played for the Hawks before: Ian Stock.”

As well as prop Stock, Hawks have also brought in Australian John Wunder and former Chinnor and RAF number eight Matt Tibbatts. There will also be a change in captaincy, with Jake Albon set to take the armband from Dave Clements.

Davies said: “Jake is going to take over the captaincy this year. Dave will still be involved in the first team but he’s just had a baby and his family commitments mean he can’t commit as much as last year. The change of captaincy is probably a good thing, Dave hasn’t got that many seasons left and so now the leadership will be fresher and younger.”

Davies says the club will still be looking to bring in players through the youth and reserve teams rather than focusing on dual-registration players.

He said: “We have no links with Premiership or Championship teams. We’ve got a couple of young lads from Ealing academy but that has nothing to do with the Trailfinders. They will play their club rugby with us and they aren’t considered dual-registration.

“We are looking strong and have a good set-up at the Bulls and Vikings. When we played Harlequins and Trailfinders in pre-season we had a number of players coming up from the third team. We are hoping to bring a few players through and youngsters are coming through the ranks.”

Tomorrow’s game is being billed as “The Battle of the Thames” and Davies says that the local rivalry, followed by a second game away to Chinnor, is a exciting start to the season for the fans.

He said: “We’ve got two derby matches for our first two games. There are a fair few players unavailable this weekend, Clements being one, but we still have a strong squad. It’s going to be a hard fixture, the first one always is. They finished above us last year and are going to be favourites but we are confident.”

The match against Redingensians is a repeat of last season’s opening fixture, except that the Hawks were away on that occasion. However, they won a close encounter 26-22 and then pulled off the double by winning the return game, another narrow affair, 17-12 at Dry Leas in January.

Nevertheless the Rams had the bragging rights, finishing sixth, three places above the Hawks who ended up in ninth place.

Pre-season games have showed that the Hawks have built a squad which will be stable, relying on the recruitment of players who have come to the club on a permanent basis and of appropriate experience and ability.

The only player who will be playing from the previous policy of selecting players from a premiership background is scrum-half Connor Murphy who, in previous seasons, has made occasional appearances from London Irish.

He has signed a short term contract which will terminate at the end of September when he takes up a professional contract in the emerging leagues in the USA.

There will be several positional changes. With the advent of Connor Murphy, George Jackson has moved over to the other half-back position and has been a success in pre-season games. He takes the place of Joe Butler who moves to fullback Tom Hall and Sam Portland were not available for selection because of injury.

A strong bench includes Matthew Tibbatts at number eight, formerly at Chinnor, John (Juan) Wunder, who has moved from Australlia where he played in top grade rugby in N.S.W in the front row, and Michel Kruzycki, who has 32 international caps for his native Poland and formerly played locally for Abbey.