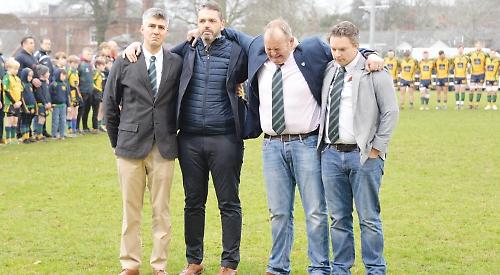 THE family of a Henley Rugby Club player who died after collapsing during a match were presented with his shirt at a ceremony in his honour.

Players and supporters of all ages gathered at Dry Leas, the club’s ground in Marlow Road, to pay tribute to Simon Priestley, who was captaining the Bears, the club’s fourth team, against High Wycombe on January 6 when tragedy struck.

The 46-year-old fly-half collapsed just before half-time and the club physio, referee and players from both teams as well as paramedics tried in vain to revive him.

He was taken by ambulance to the Royal Berkshire Hospital in Reading where he was pronounced dead.

Before Saturday’s home match between Henley’s first team the Hawks and Tonbridge Juddians, dozens of children from the club’s mini and junior squads formed a guard of honour at the entrance to the pitch.

The away team ran on first followed by the Hawks, who were accompanied by Mr Priestley’s widow Julie, their children Amelia, 11, and Jonty, nine, and his friend Nick Smith, who was the Bears’ hooker on the day of the tragedy.

The players then formed a square at the touchline next to the spectators’ seating area, where they were joined by members of the High Wycombe squad and a large group of Mr Priestley’s friends and current and former team-mates.

Max Tilney, Henley’s under-nines coach, who used to play alongside Mr Priestley in the former Henley Wanderers squad, read out a poem called Bind Tight which he wrote on the day after his death.

He said: “If in sport we build bonds, then through rugby we forge family. Whether you pull on a shirt to carry the ball or gather at the line to roar your support, never forget why you do.

“Your club is not its buildings or committees. Your sport is not one club. It is the grass, the mud and the white line that wraps them.

“No matter which side of that line you stand, your family is built within it and around it. Let that line be your magnet, your meeting point, your common thread that binds you together.

“The season is long and the line will fade. It will be redrawn, as surely as the sun rises over it and the rain feeds the turf within it.

“And it will rain. Often without warning. Days will come when that rain is unbearably cold.

“On those days be sure to bind tight. Your warmth, strength and comfort lie therein.

“Whether your view is from the shoulders of your elders or the heart of the action, you are the same family. Look to each side of you and remember who you see. They will be there to the end and beyond.

“No matter where in this world your line is painted, gather at it and bind tight. And remember why you do.”

Mr Priestley’s shirt, which he was wearing during his final match, was brought out and laid on the pitch by Mr Smith and fellow team-mates Ashley Gow, Chris Fisher and Nick Trower.

Spectators then stood and observed a minute’s silence before providing a minute’s applause.

The shirt was presented to Jonty, who is in the club’s under-10s squad before the match kicked off.

Earlier in the afternoon, the clubhouse was packed as scores of people attended a lunch in Mr Priestley’s memory.

Mr Gow, Mr Trower and Mr Fisher all gave speeches, as did Mr Priestley’s father Eric, who was visiting from Spain, and club chairman Chris Nixon.

Guests sang Stand Up For The Ulstermen, the anthem of the Ulster rugby team, as Mr Priestley was born and educated near Belfast.

The family were presented with a trophy which the Henley Vultures veterans’ team won under Mr Priestley’s leadership during a tournament in Lyon last year. Rob Heginbotham, the Bears’ and Vultures’ manager, said: “It was wonderful to have the whole club together on the field and to have such a strong turnout for the lunch.

“The guard of honour, the reading, the silence and the applause were all highly emotional and I’m sure everyone agreed it was a fitting tribute.

“The whole day was very much a celebration of Simon’s life. There was obviously some sadness but we also had quite a few impromptu renditions of Stand Up For The Ulstermen and the bar takings were pretty extraordinary.”

Mr Tilney, from Gallowstree Common, said he was inspired to write his poem after the club observed a minute’s silence on the day after Mr Priestley’s death.

He said: “It came to me fairly quickly because that morning was very emotional and stirred up a lot of thoughts and feelings. It stripped everything back and made you reflect on what really matters, away from the politics and administration that being in a club sometimes involves.

“That bond and association between members is really special.

“Saturday’s ceremony was extremely moving and a fitting tribute to a man who was a huge part of the rugby club and a huge part of many people’s lives, whether current or former players or family members.

“People are very touched by the outpouring of support that Simon’s family are obviously receiving from the whole rugby community, not just from Henley Rugby Club but from the wider sport.”

Mr Priestley, a transition director, of Chilterns End Close, moved to Henley from Coventry 18 years ago and joined the club a year after arriving.

He and his American wife, whom he met in Portland, Oregon, had been married for 16 years.He might have been a regular player for the Hawks but suffered a serious leg injury which stopped him playing for more than a year.

He became a stalwart of Henley Wanderers and went on to play regularly for the Bears and the Vultures as well as being part of the under-10s coaching team.

He was also a keen mountain biker and took part in the annual PIP Mountain Bike Challenge, which starts and finishes at Lovibonds brewery in Market Place.

Plans for a memorial match in his honour are now being discussed.

A memorial service was held at St Mary’s Church in Henley on Wednesday and was followed by a reception at the club.