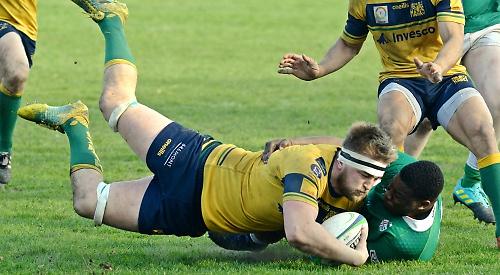 A HENLEY Hawks player collapsed and died after his side’s first match of the new rugby season.

David Hyde, who was a lock, complained of being “in pain” after the game at Dry Leas on Saturday and was taken to the club’s physio room.

His condition deteriorated quickly and he was taken by air ambulance to the John Radcliffe Hospital in Oxford where he died overnight.

Henley Rugby Club cancelled all training this week and postponed their home match against Hinckley tomorrow (Saturday). Mr Hyde, 29, from Faringdon, leaves his wife Katherine, who is responsible for the Hawks’ social media posts, and their young son, Tore.

The former Witney player was taken ill after Henley’s National League 2 South match against Old Albanian, which they lost 19-25.

Luke Allen, the Hawks’ head coach, said: “He played the whole game. His adrenaline wore off and whatever was affecting him took over.

“He was an integral member of the team and a huge personality, both as a rugby player and socially. It’s such a sad and tragic loss.

“His family were big members of the club and both his parents and Katherine’s parents were very supportive and came to most games, both home and away.

“It has been fantastic the response we’ve had from fans, colleagues and other rugby clubs. The Old Albanian team have been fantastic in showing their support and getting involved in the tributes.”

Mr Allen, who became head coach in 2018, said Mr Hyde’s death had affected the other players.

He said: “It has really hit the boys hard, especially with some of them having been groomsmen and a best man at his wedding.

“I think the boys will get through it together and I hope that when we return this will be something that we can all take motivation from.”

The team will be working with Brave Mind, a charity to help rugby players talk about their mental health, launched by former Henley player Simon Trower.

Tomorrow they will be getting together to play some touch rugby and help each other through their loss.

Witney Rugby Club will be holding a one-minute silence tomorrow to remember Mr Hyde’s time at the club and the friends he made there.

Nigel Dudding, director of rugby at Henley, said Mr Hyde was known as a “gentle giant”.

He added: “He was very popular among his peers and the
spectators. He was just a kind and loving person.”

Mr Hyde started his rugby career at Witney in 2013 after attending Portsmouth University.

He stayed at the club for three seasons before joining Henley in 2016. He was named player of the year in his first season.

The 46-year-old father-of-two collapsed just before half-time and the club physio, referee and several players from both teams tried in vain to save his life.

Ambulance crews were called to the pitch and used a defibrillator and CPR to try to revive him.

He was taken to the Royal Berkshire Hospital in Reading by ambulance with his wife Julie, who had been pitch-side, but was pronounced dead shortly afterwards.