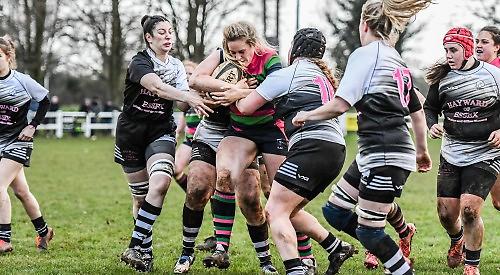 Determined to make improvements on the 50-0 drubbing they endured earlier in the season away to the Essex outfit, Abbey came out of the blocks firing, in one of their brightest starts this season.

Tactical kicking into the corners by fly-half Annette Bevan and fullback Louise Pullan secured early territory for the home side, threatening the Thurrock line early on. Early endeavours from wingers Fleur Walker and Olivia Grane couldn’t quite get over the whitewash and Thurrock, displaying a strong turnover game at the breakdown all match, assuredly escaped time and time again.

Abbey’s scrum once again displayed its dominance, the front row of Hollie King, Claire Stevens and Jess Potter turning over two balls against the head in the first half, with Alice Denton Rice, playing her 60th first team league game for Abbey, excelling in her debut second row performance. In open play, her second row partner Joey Fowler led from the front with her tackle count, bringing a physicality to inspire the rest of her team.

By half time, Thurrock had scored three unanswered tries through hooker Georgia Cook and a brace from second-row Claire Phelps, yet Abbey were buoyed by the fact they were significantly reducing October’s deficit, and the team felt a confidence that they would be soon on the scoreboard themselves. The home side’s performance had continued to evolve and adapt throughout the first half, and second-half substitutions in the form of Hannah Gale and Tori Kiff continued to increase the tempo and intensity.

It was after Thurrock’s fourth bonus-point try from pacey winger Niketa Akintade in the early minutes of the second half that Abbey played a period of their best rugby all match.

A huge clearance kick from Alice Denton-Rice after receiving the restart ball was touched by the Thurrock fullback on its way into touch, meaning the resultant line-out was Abbey’s. After Bevan worked centres Montgomery and Wilkinson up the pitch with some hard running lines, consecutive penalties allowed the home side to encroach further.

Eventually, after strong carries from flanker Wall, Potter and Alice Denton-Rice, the ball was worked wide once more by scrum-half Ellie Denton-Rice, who enjoyed a magnificent performance, and Wilkinson sliced through a gap to score.

Thurrock grabbed a late consolation try in the form of Hannah Thornhill.