Our boy's the musical star of Strictly but hates fame 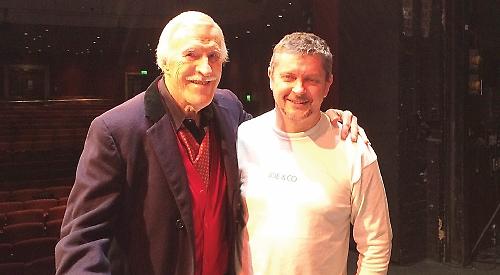 WHEN millions of TV viewers snuggle into their sofas to watch the Strictly Come Dancing Christmas special on Sunday, it will be extra special for one family from Sonning Common.

Gwyn and Jane Arch, who live in Grove Road, will be enjoying the evening with their son at his home in Chorleywood.

David Arch is one of the hit BBC show’s unsung heroes, having been its musical director for 11 years.

Dave (to use his Strictly stage name, which his mother hates) spends hours each week arranging and composing the music and then conducts the band on the live
programme.

His parents nurtured his musical talent when he was a child and he began learning to play the piano and violin at the age of four.

Now they are enjoying the rewards — and probably more than their son himself.

Mr Arch, 85, says: “We are very, very proud of the way David has progressed. He has worked with all the best people.

“He was always big musically but we never let him know that, which is one of the reasons he is such a humble person now.

“He loves doing the show. He is amazed how lucky he is to be there.”

Mr and Mrs Arch are both musical and they met when he was the musical director of the Experimental Theatre Club at Oxford University, the equivalent of the Cambridge Footlights.

The couple were married two years later and made their home in Watford where David and his younger brother Jonathan were born.

The family moved to Sonning Common in 1964 when Mr Arch obtained a job at Bulmershe teacher training college in Woodley following a successful interview.

He says: “I went back and found out I had got the job. Before that I went to look at the house but I had no idea there was a difference between Sonning and Sonning
Common.

“The following weekend Jane and I came to look at the house and decided to buy it.”

Mrs Arch got a job at the village primary school, working her way up to deputy head before retiring in 1985.

Mrs Arch says: “Sonning Common was a brilliant place for them to live and grow up. We have a superb health centre. We no longer have a bank but we used to have two. The worst thing about it now is the parking and the traffic.

“Jonathan went to Cambridge University and read natural sciences, then he went to Aberystwyth and did a PhD in geology. He went to work for various companies like Deloitte.

“Now he has his own business as a waste management consultant where he does a lot of work with local authorities.

“Jonathan was good at the cello but rugby took over so he gave up music until after he was married.”

Now Jonathan’s daughter Lucy plays in the BBC Philharmonic Orchestra and he himself has got back into playing.

Mrs Arch says: “He came and collected his cello from our attic and took it back with him.

“Now he plays the double bass and plays in an amateur orchestra two miles from his home. It’s lovely he came back to music.” By contrast, David could not be distracted from music as he was growing up.

While at school and college, he played in the Oxfordshire and the Berkshire youth jazz orchestras and then he won a place at Guildhall School of Music and Drama in London.

“In his second year he started to play in a band for a West End musical but to start with he was a deputy.

“When he left college he went on tour with Wayne Sleep as a musical director at age 23. Then he started getting a lot of jobs.”

For the next 30 years the jobs have not stopped coming.

David has played the piano in scores for more than 200 major films including The Imitation Game, Interstellar, The Grand Budapest Hotel, Gravity, The Danish Girl, Philomena, The King’s Speech and five of the Harry Potter franchise.

Often this is has been in conjunction with Oscar-winning composers Hans Zimmer, Richard Williams and Alexandre Desplatt.

Last month, David released his own album, Coming Home, which is full of his own compositions, including big band numbers, rock, modern jazz rock and a melodic jazz-style ballad.

The album, which was partly recorded at the Abbey Road studios, where McCartney recorded with the Beatles, features some of the friends he made when they played together with the national youth jazz orchestra.

David has also composed and performed the music for TV adverts and programme theme tunes.

He has been the arranger and composer for the last six Royal Variety Performances.

However, it is Strictly that he is best-known for, having been headhunted by the BBC to succeed Laurie Holloway in 2006.

Mr Arch says: “I think we take it for granted now. It’s just progress with his work. He plays for a lot of films, too, but people don’t know about that and it’s quite different from his TV work.

“For Strictly he writes all the music then conducts it but for films he is a performer on the piano or keyboard.”

Mrs Arch said: “This has been David’s 11th series of Strictly. Once it starts each September it takes up his whole life.

“It was already a big show when he took it on and it is a huge commitment for him to write all the arrangements.

“All the dancers practise to recordings then David has to make it into big band music but for 12 or 13 people. At the beginning he let someone else help but he wasn’t happy with them.”

Mr Arch added: “For Strictly you have to not only be able to conduct but also arrange. David is a gifted arranger. He can take any music, Sinatra for example, and produce it with the Strictly band because he writes it so well. He arranges it, composes it and conducts it. He does the full range of things.”

However, according to his mother, there is a side to the job that David is not so keen on.

“On the programme after the first dancers, they always show the band and David,” she says. “You can always see in his face that he hates that.”

She adds: “We have two sons and I have always been very proud of both of them and treated them both the same.

“David is the David he always was except he has grown a beard now and I’m not very keen on it at all.”