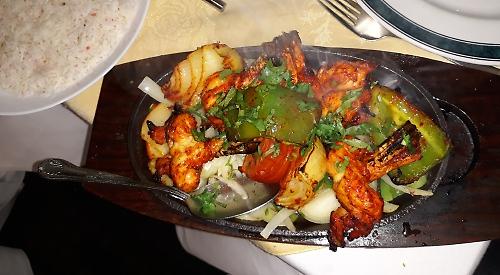 TANDOORI Connoisseur Restaurant is located in the heart of Sonning Common serving the finest Indian cuisine.

The history of Indian cuisine has changed many times in the last 2,000 years so it is very difficult to establish the exact origin of the cuisine.

The Indian population, which was basically dominated by Hindus and Buddhists, were mainly vegetarians and their vegetables were spiced and cooked in a watery sauce which was known as curry.

After the invasion of India by first the Greeks and then the Persians, several new spices were added to the food, thereby changing the culinary habits of various provinces of India.

But the greatest impact on the cuisine came from the northern invaders who eventually created the Mughal Empire and ruled for several hundred years.

During their reign they built such famous places as the Taj Mahal and many other well known monuments but, for our part, the greatest contribution was their culinary habits which included the use of spices such as saffron, garam massala and several others which lead to the standard of cuisine we know today.

Many of our dishes are cooked in a tandoor which is a barrel-shaped open-topped clay oven fired by charcoal.

Breads can be baked in a tandoor, as one can roast lamb or chicken. Tandoori dishes are marinated in yoghurt with appropriate herbs and spices and then cooked in a tandoor.

We are very proud of the standard and presentation of our cuisine.