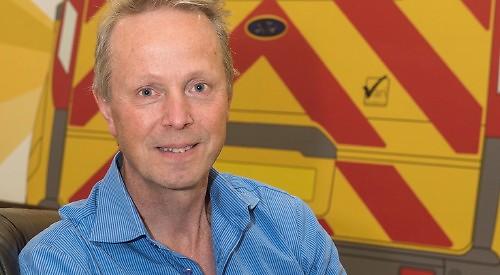 AN executive with the AA received an OBE in the Queen’s birthday honours.

Gareth Kirkwood, who is managing director of the motoring association’s roadside services, was honoured for services to road transport during the coronavirus pandemic.

The 58-year-old, who lives in Sonning Common with his wife Ali and children Rhuari and Erin, said he felt “very proud and humbled”.

He said: “I’m really accepting this honour on behalf of the thousands of people at the AA who worked throughout the pandemic.

“The patrol teams are incredibly professional and always put the customers first during the pandemic and the standard of service never dropped.

“I’m under no illusion that although I got this honour as an individual, it’s very much on behalf of my team.”

During the first lockdown in March last year, the AA offered free breakdown support for NHS staff, which 17,000 people registered for and about 2,000 used.

Mr Kirkwood said: “There are about 500 to 600 London ambulances and AA patrols worked with mechanics to keep them on the road as they do break down from time to time.

“We wanted to keep as many of them on the road as possible. We were proud to support them.” The company also provided about 2,000 free signs to 200 vaccination centres around the country.

Mr Kirkwood said: “Some centres are obvious places like stadiums but for the other ones we provided free signage pointing people to them. It takes about 10 signs per place and there were about 200 across the country. Alongside all that we were still supporting our existing members. We have about three million breakdowns a year, though that number was slightly less last year. Beakdowns were probably 25 per cent less than usual.”

Throughout the pandemic, the majority of AA staff worked as normal with only a few being furloughed during the first and second lockdowns.

Mr Kirkwood, who has lived in Sonning Common for 20 years, joined the AA in 2017 after being recruited from Expedia where he was a programme director for three years. Before that he spent about 13 years as managing director of British Airways’ cargo deparment and then became director of operations for a regional airline.

Tim Stevenson, the outgoing Lord-Lieutenant of Oxfordshire, was made a Knight Commander of the Royal Victorian Order.

The 73-year-old barrister was awarded an OBE in 2004 for services to education and in 2010 was made a Commander of the Order of St John.