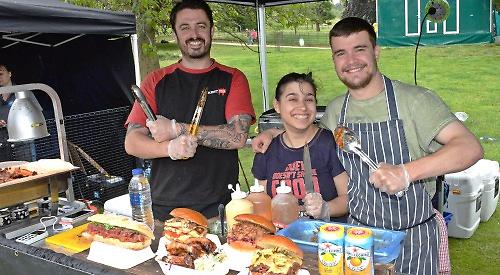 THE second annual Stonor Food Festival proved even more popular than the first.

Thousands of people attended the event on the Stonor Park estate over the weekend, featuring about 60 food and drink stalls and a live festival kitchen for demonstrations by top chefs.

These included multiple Michelin star and AA rosette winner Jean-Christophe Novelli, who gave a display of French cooking and talked about his upbringing and its influence on his career.

Atul Kochhar, who runs the Michelin-listed Sindhu Indian restaurant in Marlow, showed how to prepare a curry in 20 minutes and invited the audience to taste it when he had finished.

He also made a chickpea salad and showed how to make a meringue by whipping the residue from the tinned chickpeas in the same manner as egg white.

Mr Clerehugh, who runs the Crooked Billet in Stoke Row, said: “The festival was one of the best that I’ve been to.

“I loved the eclectic mix of traders as food festivals can be quite samey whereas this had a real variety and, importantly, there were a lot of local producers. The setting was incredible and it was great that the kids could go off and use the adventure playground while parents enjoyed the festival.

“The demonstrations were also really interesting with a good mix of chefs.”

Also giving talks and workshops were Olivier Bouet, of the Red Lion at Britwell Salome, nutritionist Eva Humphries and Robert Laycock, who runs the English Farm beef farm. There was a wine and cheese tasting hosted by Martin Chapman, of Watlington Fine Wines, and Rose Grimond, of the Nettlebed Creamery. These three businesses had stalls selling their produce, as did the Fairmile Vineyard, of Henley.

There were games for children including a giant draughts board and a Connect Four set.

Everyone who attended was able to explore the main house and the first 1,500 dads to arrive were given a free bottle of Brakspear beer to celebrate Father’s Day on Sunday.

The Hon William Stonor, whose family owns the estate, said: “We were thrilled with the attendance, which was strong even though the weather was a little unkind at times.

“We were wondering whether people would come because of all the storms in the run-up to the weekend but we needn’t have worried.

“We had more stalls than last year and there was a lovely, relaxed ‘village’ feel. We changed the layout to include different seating areas, which worked really well, and the festival kitchen was extremely popular.

“Having spent three years out in India, I really enjoyed Atul Kochhar’s demonstration as I’d always assumed curry took a long time to make and was surprised how quickly he prepared some amazing food.”