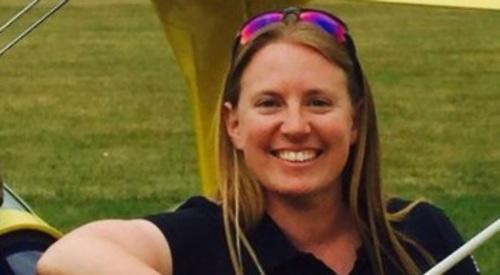 CAROL VODERMAN has paid tribute to an aerobatics pilot who was one of two people killed when their plane crashed near Henley.

The former Countdown star had been taught how to do a loop-the-loop by Emily Collett for a TV show.

Mrs Collett, 36, and her student Tom Castle, 43, died when their light aircraft crashed into a field near Stonor at about 2pm on Saturday.

Both were pronounced dead at the scene. Nobody on the ground was injured.

It is believed that they had been practising spins in the Pitts S-2A plane.

Vorderman paid tribute to Mrs Collett on Twitter, sharing fond memories of lessons she gave her in July 2017 for BBC 1’s The One Show.

She said: “Such a terrible loss. Emily was an extraordinary young woman and pilot and my time with her in the air was nothing but a joy.

“My heart goes out to her husband Mike, to Emily’s family and to Tom Castle’s family in their grief. Rest in peace.” Thames Valley Police assisted the Air Accidents Investigation Branch to examine the scene of the crash and to determine the cause.

Some of the plane wreckage has been taken to the AAIB’s headquarters in Hampshire for analysis.

Residents reported traffic jams on the main road through Stonor for some time after the incident.

The plane is believed to have taken off from White Waltham airfield, near Maidenhead, where Mrs Collett and her husband Mike ran Ultimate Aerobatics. They were both pilots and represented the British Aerobatics team.

He said she had a “caring and considerate nature”, adding: “Emily’s generosity in sharing her knowledge and time to help others was well known in the aerobatic community and beyond, helping many pilots achieve their goals.

“Emily will be sadly missed by all who knew her and our thoughts are with her family and friends, who have lost a wonderful daughter, wife and friend.”

Mrs Collett is listed on the British Aerobatics website as a contact for fund-raising and youth aviation.

She started flying in 2001 and had competed for more than a decade, winning the sports class national championships in 2007.

In 2014, she travelled to South Africa with her husband as part of the British Aerobatics Team and won a silver medal.

In 2016, she became British advanced national champion and the following year she became the first female member of the Great War Display Team.

Trig Avianoics, a company endorsed by Mrs Collett, issued a statement saying: “The team here at Trig are deeply saddened by the loss of Emily and her passenger.

“We wish to extend our sympathies to all those affected, in particular Emily and Tom’s relatives.

“Emily was a highly skilled pilot and amazing role model. She inspired others to take to the skies and had a passion for aviation that was readily shared.

“Knowing her was a privilege, she was always enthusiastic, modest and very keen for others to learn the skills that she had clearly displayed.”

According to the Ultimate Aerobatics website, the Pitts S-2A is the plane the Colletts used to learn their aerobatic skills.

The aircraft is a two-seater version of the single seat S1 model and is capable of travelling at 200mph.

A spokesman for the Air Accident Investigations Branch said: “The wreckage will be recovered to the AAIB’s facility at Farnborough for more detailed examination.

“The investigation will take some time and an accident report will be released in due course.”