‘Mermaids’ to swim the Channel for music school 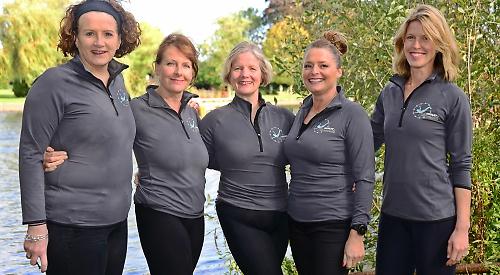 FIVE friends who are members of the Henley Open Water Swimming Club will attempt to cross the English Channel next summer.

They hope to make £6,000 for the school, which was founded in 2010 by Mrs Reineke and became a charity last year.

It provides music tuition to anyone, especially children, regardless of their background or ability and costs around £60,000 a year to run.

The women will take on the
21-mile journey from Dover to Calais in June, swimming in relay. They will be guided by pilot Eddie Spelling, who has more than 10 years’ experience of the event.

They are forbidden from using artificial aids but can protect themselves from the cold water using layers of grease on their skin.

The women are all confident swimmers, having completed dozens of challenges between them, but this will be their biggest test yet and will require every ounce of physical and mental discipline.

Many experienced swimmers have attempted to swim the Channel only to give up through sheer exhaustion but several other members of their club have managed it, which inspired the women.

The team is led by Mrs Reineke, a musician who lives in Berkshire Road, Henley, with her husband Antony, who runs Studio 35 jewellers in Duke Street, and their three children.

She said the women were all worried about the challenge, which will take around 14 hours to complete with each woman swimming for an hour at a time.

“Some of us are stronger swimmers than others and the conditions will be changing all the time,” said Mrs Reineke. “Sometimes you will have to swim much harder to make up the same distance.

“What I am most worried about is the waves. You don't get them in the Thames — not unless a boat is going way too fast.”

She took part in a qualification swim in the sea at Lulworth Cove in Dorset with Mrs Fennelley and Mrs Barry and nine other members of the club last month.

They were required to spend two hours in the water at sub-16 degrees Celsius and had to overcome huge waves that prevented them swimming along the coast.

Mrs Reineke said: “It was one of the trickiest swims we have done but you have to prove you are strong enough to do the challenge.”

She founded the school because she feels music is important, especially to children.

Her younger daughter Ava, 16, who is a student at the Piggott School in Wargrave, attends the Junior Royal Academy of Music, where she is the only student not to be educated privately.

Mrs Reineke said: “Music should be a part of every child's education. Schools have less and less money and the curriculum is becoming so narrow.

“Children are not getting all the options that should be available to them and leave school feeling disillusioned. They have no idea what they might achieve.”

Mrs Robb is 42 and lives in Shepherds Green with her husband Philip, whom she married in 2008 after coming to England from Australia on an ancestry visa on 2001. The former journalist, who has two children and three stepchildren, is a member of South Oxfordshire District Council, representing the Woodcote and Rotherfield for the Green Party.

Having grown up swimming at Coogee Beach in Sydney, she is used to warm water and is concerned about the temperature of the Channel, even in summer.

Mrs Robb said: “I am quite skinny and think it is going to be really hard for me. I will have to do lots of acclimatising and I may have to put on my own layer of fat!

“When I first came over to England I heard people talking about open-water swimming but for Australians we just think of it as swimming.

“I don’t consider myself to be a good competitive swimmer. I really just do it for my own physical and mental health. It is not about competition but connecting with nature and the rest of the community.

“I am confident that we will be able to finish but with something like this, there are only a certain number of things you can control. You can prepare for the conditions but it is in the hands of the gods.”

She added: “Henley Music School is a godsend for local families and Laura does amazing work but these services should just be available to schools anyway.

“Most state schools have had to reduce or eliminate their music provision, which is a tragedy for local children.”

Another member of the team spent time swimming in Australia.

Mrs Print, who is a registered nurse at Townlands Memorial Hospital in Henley, used to work in Sydney and was a regular visitor to Bondi Beach.

The mother-of-four now lives in St Mark’s Road, Henley, with her husband John, an accountant, and has been in the town for 25 years.

She worked in the intensive care unit at the Royal Berkshire Hospital in Reading for two decades before joining the rapid access care unit at Townlands when the new hospital opened three years ago.

Mrs Print said: “I have always loved swimming but only discovered open-water swimming about three years ago and absolutely love it. It is beautiful swimming at all times of the year.

“Swimming is just something you have to try. Most people I know have become hooked on it.

“The Mermaids all met through swimming and we have become really good friends. It is such a lovely group of girls.”

She said the thought of swimming the Channel was daunting but added: “I am quite excited about it. It is good to have a challenge ahead of you and I am confident we will all do it. We are all really looking forward to it.”

Mrs Fennelly, 53, is a sales director who lives with her partner Martin Rhodes in Makins Road, Henley, and is originally from Mountmellick in County Laois in Ireland.

She enjoyed swimming as a child so when she was challenged to swim a mile for her 50th birthday it rekindled her passion.

She now takes part in open-water swims all-year round and last summer swam 100km in 100 days and raised £3,500 for Kidasha, a charity that helps disadvantaged children in Nepal.

Mrs Fennelly said: “The brilliant thing about swimming is you can go feeling miserable and you will always come back with a smile on your face.

“This challenge is going to be very different to the conditions we are used to. Compared to swimming in the Thames, the ocean is so much more unpredictable.”

Mrs Fennelly added: “I grew up in a musical household. Unfortunately, it seems to be the arts subjects that take the brunt of funding cuts and I have no doubt that gifted children with the right opportunities benefit massively from music.

“The funding is just not there for schools nowadays and it is atrocious when you think about it. Henley is considered to be quite an affluent town and yet there is huge demand for the service Laura provides.”

Mrs Barry, 52, lives in Cromwell Road, Henley, with her husband Mike and three children and is a teacher at Emmer Green Primary School.

She has been a member of the swimming club for three years. She says she has always been attracted to water and has completed the Henley Marathon and Club to Pub Swim.

Mrs Barry said: “I am a reasonable endurance swimmer. Speed is not my strong point but I don't give up easily.

“The Channel swim is going to be a massive challenge. There will be big waves, jellyfish and all sorts of creatures so it is incredibly scary but I wanted to get out of my comfort zone. My children think it is bonkers but are proud of me,

“It will be lovely knowing that we are doing it as a team and to have your friends cheering you on.

“If it had not been for the charitable side of it, I would not have been so keen to take part. As soon as I heard the reason why we were doing it, I knew I wanted to get on board.

“I have seen education cuts take hold over many years and it has certainly hit music and arts education. Schools find it very hard to offer music, which should be available to all children. Henley Music School really fills a huge gap.”

If you would like to support the Henley Mermaids, visit www.gofundme.com/f/laura039s-campaign-for-henley-music-school