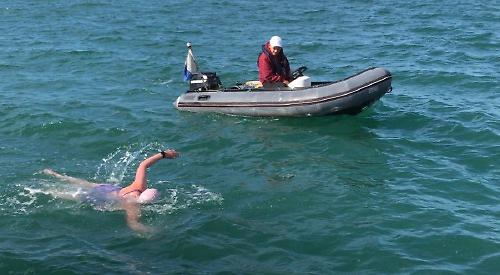 A GROUP of women who swam the Channel in relay last year are to attempt the same with the Bristol Channel this summer.

The Henley Mermaids plan to attempt the 25-mile crossing from Ilfracombe in North Devon to Swansea in South Wales on July 22.

If they are successful, they will become the first all-female team to complete the challenge.

Laura Reinke, Jo Robb, Joan Fennelly, Susan Barry and Fiona Print are all members of the Henley Open Water Swimming Club but have a range of experience.

They wanted a new challenge after swimming 21 miles across the Channel in less than 18 hours last July and raising £27,000 for Henley Music School, which is run by Ms Reineke.

They have opted for one of the toughest routes across the Bristol Channel, an inlet which is more than 30 miles (50km) wide at its western limit and is hazardous because of its strong tides.

The swim is likely to take them between 15 and 24 hours and they will each swim for an hour at a time, as they did with their previous challenge, resting on a pilot boat in between legs.

The swim was suggested by Mrs Print, whose sister Amanda lives in Clevedon in North Somerset, on the coast north of Ilfracombe.

Mrs Print, a nurse at Townlands Memorial Hospital in Henley, said: “I never thought I would end up swimming the Channel. It was a massive personal achievement. With it being such a horrible year, it was such a feat to accomplish. We are still riding high on it.

“I was chatting to the girls and we all enjoyed that so much, I said we should carry on. They were all up for it.”

Mrs Print, who lives in St Mark’s Road, Henley, with her husband John, an accountant, only started swimming three years ago.

“Then I couldn’t even do the crawl very well,” she said. “Now it has become a passion and is a very important part of my life.

“I’ve met so many amazing people and made some very good friends from it.

“As the Mermaids, we are such a strong and close group of friends that we just wanted to carry on because we are enjoying it so much.

“We’ve all got different professions and are all different as people but we have a shared love of swimming. When you swim it is something for yourself and you’re not a nurse, or a mum, or a wife.

“We all swim in the river all-year round and you get such a buzz from it.”

Normally, they would be required to complete a qualification swim but if this is not possible due to the covid-19 restrictions they should be able to use their Channel swim as evidence.

Mrs Print, a mother-of-four, has been on the frontline during the pandemic, working in the intensive care unit at the Royal Berkshire Hospital in Reading.

She said: “It does worry me that we might not be able to train as much as we did last time.

“We don’t know how long these restrictions will last and we did a lot of training over last winter in a swimming pool that we’re not doing now.

“We will have to go with the flow and do what we can.”

Ms Reineke, 47, of Damer Gardens, Henley, so enjoyed the previous challenge that she is to attempt a solo crossing of the Channel in 2023 to raise money for the music school.

In February, she represented Great Britain for the first time at the 12th Winter Swimming World Championships held in Bled, Slovenia, which is twinned with Henley.

Ms Reinke, a mother of three, said: “The Channel swim ended being up the best part of last year. We loved it.

“Now we feel like we need to do something else — none of us is particularly good at sitting still and everybody knows they can do something like this.

“It was really hard though and this one may even be more challenging but hopefully we will be able to get more experience of swimming in the sea. We weren’t able to do much last time because of the lockdown and it will be important to do as much distance practice as we can.

“We are in the river at the moment but you can’t do any distance. The water is too cold to spend more than 15 minutes. It is 3.5 at the moment and in flood.

“We are all keeping fit with online Hiit classes, bike rides, Pilates and running.

“We do all have residual swimming fitness, as we swim so much, but as soon as lockdown is lifted we will have to get back into the pool for lots of lengths.”

Ms Reineke founded the music school in 2010 and has kept it going over the past year with online classes.

Mrs Fennelly, 54, who lives with her partner, Martin Rhodes, in Makins Road, Henley, swam the final leg of the Channel swim.

She said: “It was a hugely emotional day and a really humbling experience.

“I would say that it was the proudest and best day of my life and it will be hard to top it but the camaraderie is prevailing and pushing us on.

“The fact that we are doing it on the anniversary of the Channel swim will make it even more special.”

“The bond with the Mermaids is really important. It is like they are your sisters.”

Mrs Fennelly, who is managing director of a software company, used to swim in a stream in her native Ireland when she was a child.

When she was challenged to swim a mile for her 50th birthday it rekindled her passion.

Now she takes part in open-water swims all-year round and in 2018 swam 100km in 100 days, raising £3,500 for Kidasha, a charity that helps disadvantaged children in Nepal.

Mrs Robb, 43, is an Australian who learned to swim at Coogee Beach in Sydney. She came to England on an ancestry visa in 2001 and married her husband Philip in 2008.

The couple now live in Shepherds Green with their two children and Mr Robb’s three children.

Mrs Robb is a member of South Oxfordshire District Council, representing the Green Party in the Woodcote and Rotherfield ward.

She said: “The difficulty with the Bristol Channel is there are very strong currents, so we need to be prepared for that.

“The Channel swim was more of an endurance event, but with this one we will have to be quite careful.

“We are just ordinary women but we have really bonded through this and it has given us a sense of our own power.

“I don’t think we realised before how strong we were and what we were capable of doing, so there is no stopping us now.”

Mrs Robb has fond memories of the previous challenge. She said: “The other day I was going for a run and I took out the old Channel swimming lights that you need to attach to your costume and I had a rush of pride and excitement come over me.

“In the context of what was a pretty awful year, we can say that we did something quite amazing. If I could tell my 20-year-old self that I would go on to swim the Channel, I don’t think I would have believed it.”

Mrs Barry, 53, a teacher, who lives in Cromwell Road, Henley, with her husband Mike and three children, has been a member of the swimming club for three years and has completed both the Thames Marathon and Club to Pub Swim.

She said: “I feel slightly daunted this time. It sounds like it might be even more scary than the last one but we are keen to find a new challenge and it is always nice to have something to work towards.

“We know a bit more of what to expect having done it once and dealing with the salt water and the currents.

“That almost seems like a distant dream now but it was an amazing achievement.

“We are a mixed bunch of swimmers and I am probably the weakest swimmer, so it was huge for me.

“What worries me slightly this time is the amount of training we will get depending on what happens but I am optimistic.”