'Revamping an Eighties classic? What a feeling!' 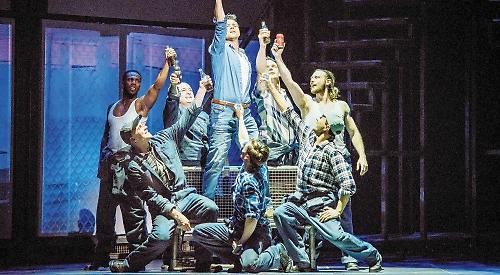 THE film is an Eighties classic that was panned by critics but proved a surprise box office smash.

Starring Jennifer Beals in her breakout role, Flashdance was the third highest-grossing film of 1983 in the United States and is since thought to have earned more than $200million worldwide.

Ten years ago it was turned into a stage musical with choreography by then Strictly Come Dancing judge Arlene Phillips.

Now it is returning for a UK theatre tour that will take it to the Wycombe Swan later this month — but in a revised and reworked form that the creative team are hoping will resonate even more with audiences.

The man behind the musical’s new score is composer and co-lyricist Robbie Roth, whose compositions have been heard on stage, screen and radio all around the world.

With Flashdance fans digging out their leg warmers, what can they expect to see that’s different from before — and why the revamp?

“You can’t just take a movie and put it on stage and expect it to work,” says Robbie. “The musical is always going to differ slightly. When we took a retrospective on the previous tour, we felt we may have stepped too far away from the movie and wanted to bring back a few of those iconic moments and characters, that had not made it to the stage in the previous incarnation. What we’ve done over the years since is learned to understand how to honour the film and uphold all those things that rightfully made the film iconic but bring this to the stage with a strong narrative.”

Flashdance the Musical tells the story of 18-year-old Alex, a welder by day and “flashdancer” by night, who dreams of going to the prestigious Shipley Dance Academy and becoming a professional dancer. When a romance complicates her ambitions, she harnesses it to drive her dream.

“Unlike a movie, which can use many other techniques to draw the audience in, a musical really has to work hard to portray characters in a rich enough way and allow us to believe their relationships and journeys,” says Robbie. “So we’ve spent a lot of time figuring out that challenge, which is a real balancing act, to better represent the film but put forward a fully rounded and believable piece of musical theatre.

“However, everything you remember from the movie — the sweatshirt off the shoulder, the ballet shoes, the older friend mentor, the audition, the waterdrop! — all those things are represented properly in the show. Part of making this work for us was the decision to rework the score of Flashdance — which has included the addition of a few numbers, with a view to further tell Alex’s story.

“One new number is Alex’s last solo number where she is confronting a wide variety of emotions and everything has come to the fore. She has to deal with the loss of her mentor, the loss of her love, and she’s contemplating leaving Pittsburgh, going back home and stepping away from her dream.

“I wanted to find something musically that touched on all those things. Many of the musical themes throughout the show represent a different emotional state for Alex. This number pulls all of these themes together to create a real ‘moment’ just prior to Alex’s big audition.

“We have also added a beautiful sequence in the first act that helps to further establish the relationship between Nick and Alex. I wanted to compose something that could escort them on their date but also serve to be another one of these themes — the romantic theme!

“I think we found something very beautiful that we have peppered through the rest of the show, as the love theme for Alex and Nick. They’re such different people out of the gate and in the show it could appear their relationship happens quickly — being musical theatre. We felt we needed something to honour this, show their connection and give it some pace to deepen and strengthen that relationship. So we did this musically.

“One of the biggest challenges of this project and score was finding a way to give people what they remember in these big iconic numbers but also to move that forward with additional songs. We needed to find a palette both sonically, melodically and rhythmically, that was consistent with songs like Gloria and What a Feeling by pulling out sounds and rhythms, so that the show still feels like one piece on stage.”

Having immersed himself so deeply in everything Flashdance, does Robbie have a favourite song?

“I do have a favourite song which has been with us through all the incarnations of the show. It’s in the first act, called Here and Now, which is sung by Alex and Nick when they realise their feelings for one another. Musically, I think it’s got all the elements of a really beautiful, soaring love song. But it also accomplishes a lot by acknowledging their connection and telling their story, which over three and half minutes in song is not an easy feat. Most fun for me is that it’s a really catchy, hooky, Eightiesesque power ballad — so it checks all the boxes for me.”

Flashdance the Musical is playing at the Wycombe Swan from Monday, January 22, to Saturday, January 27. For performance times and tickets, visit www.wycombeswan.co.uk