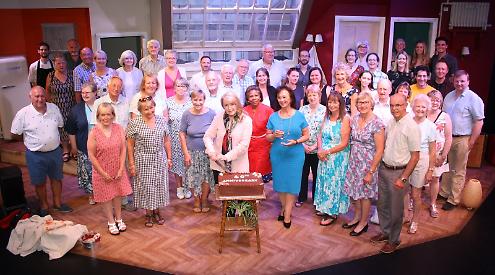 SUPPORTERS and staff at the Mill at Sonning celebrated its 40th anniversary.

Mrs Hughes’s late parents Tim and Eileen Richards had bought it with her late uncle Frank Richards in 1978.

The building, which was a former flour mill, had been empty since it was closed in 1969 before they went about restoring and converting it into a theatre.

The Mill opened on July 22, 1982 and Peter Egan was artistic director for the first two years before Mrs Hughes took over and then became managing director as well in 2002.

Mrs Hughes, a former actress, said she had “mixed emotions” about the theatre reaching its ruby anniversary. She said: “It brings back memories of my parents — it makes you look back. The 40 years have flown by.

“We had a gentle celebration and it’s nice to see staff and friends of the Mill smiling together, especially after the last two-and-a-half years of the coronavirus pandemic — it’s nice to say we made it.

“We call it the ‘fun factory’ — we always have something to smile about. You’d think after 40 years you would have seen it all but every day is different here.”

About 50 people attended the celebration and were greeted at the entrance by an anniversary sign covered in gold, burgundy and pink balloons opposite a bust of Mrs Hughes’s father.

There are about 150 “Friends” of the theatre who pay annually and about 20 “Mill Angels” who also give a financial contribution.

Mrs Hughes cut a 40th anniversary cake on the stage in the auditorium, named after Ray Cooney, a playwright who helped keep the theatre going through the pandemic.

It was also filled with fresh air from a new air-conditioning system which was bought using money from the government’s Culture Recovery Fund.

Mrs Hughes was handed a bunch of flowers by production manager Joan Farnese on behalf of the team of staff. The party then returned to the bar area where guests had glasses of prosecco.

Mrs Farnese, who has worked at the Mill since 1989, said: “Sally does so much for us — I just wanted to say thank you. It’s a hard job looking after this amazing building and putting together an amazing team that love this theatre.”

She added: “I’m so pleased to be here after everything over the last few years and here’s to many more.”

Philip Young, who lived in Sonning when the building was bought and knew founders Frank and Tim, came to many productions over the years.

He now lives in Bourne End but keeps coming back. He said: “I love the atmosphere and also the value – you get good food and a professional show. It’s a better experience than going to the West End where you have to get the tube or a taxi.

“Having known the Richards, I really want to support it. It’s such a great local facility. We don’t regard it as just a social enterprise — we have affection for it.”

The Mill won the UK’s “Most Welcome Theatre” award at the annual UK Theatre Awards three years running prior to the pandemic closing theatres in 2020.

An announcement will shortly be made for its forthcoming season. Productions will include Funny Money by Mr Cooney and musical Top Hat in addition to various comedy and magic nights, concerts and talks.