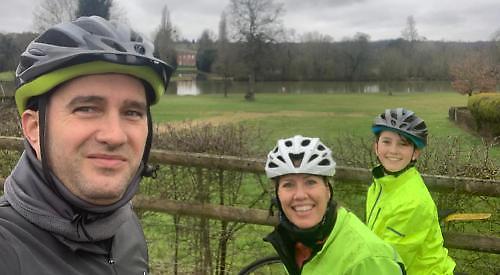 A TEENAGER from Wargrave cycled 100 miles in two weeks for charity.

Jonah Holloway, 13, raised more than £400 for FareShare UK, a national charity which aims to reduce food waste and fight hunger, after learning about human rights at the Piggott School, where he is in year 8.

He took the opportunity to go out on his bicycle at lunchtimes while being home-schooled with the help of his parents, Matt and Allison, both 45.

His father took up cycling again during the first national lockdown last year and his mother, who works in communications at the school, accompanied him on most of his longer rides.

Jonah, who lives with his parents and sister Eden, 11, in Victoria Road, took 16 days to complete the 100 miles, riding to Warren Row, Aston, Remenham and back and to Waltham St Lawrence when he went further at weekends. His longest ride was 17 miles.

So far he has raised £417, more than four times his original target of £100, and was surprised to receive so much support.

Jonah said: “We were studying human rights in an R.E. lesson and one of those rights was access to food. Even when food is available, some people don’t have the money to buy it.

“We were asked to pick a challenge and I wanted to raise money and awareness about food waste.

“I did enjoy doing the really long rides. My first ever 20km was just before I started doing the challenge and that’s when I thought it was cool and fun.

“It took two weeks but we had some snow and it was rather rainy, so I couldn’t ride on some of the days. On my first couple of long rides, I did get quite a lot of back pain because you are leaning over the whole time but when I’d done it more often it wouldn’t hurt and I could go further.

“I do enjoy it and now I’m into cycling.”

Jonah was already aware of food charities as his mother used to work for the Lost Food Project when the family lived in Kuala Lumpur.

He felt that FareShare UK was very similar as it takes food that supermarkets would otherwise dispose of and distributes it to people in need.

Just £1 raises enough to provide four meals to those in need, which means £400 will provide 1,600 meals.

His parents lived in Melbourne for about seven years before returning to the UK. They lived in Ealing, where Jonah was born, and then moved to Malaysia. In 2019, they came back again to the UK and settled in Wargrave.

Mr Holloway, who is an architect, said: “Cycling has been my only exercise in lockdown and I’ve become a bit cycling crazy.

“Having moved back to the UK, I got together with a group of friends in Wargrave who love cycling and it has grown from there.

“Jonah has surprised us all with his efforts and he has pushed himself quite hard. He has certainly got a lot fitter and I hope he keeps it up.”