More women should look and feel good after surgery 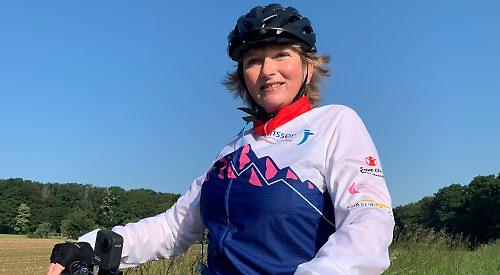 A WOMAN who beat breast cancer is now helping other women have more choice when it comes to surgery and
reconstruction.

Jane Shaw, from Watlington, was diagnosed with stage two cancer in May 2018 after discovering a lump in her left breast.

She underwent a six-hour operation in Switzerland and is now halfway through her five-year,
“disease-free” goal.

She is currently cycling more than 1,000km from Hampshire to the French Alps, averaging 90km a day, for charity.

Mrs Shaw, 56, was operated on by Professor Walter Weber, one of the world’s leading experts in oncoplastic breast surgery.

This involves removing the cancer followed by reconstructive surgery, which is performed by a plastic surgeon, usually during the same operation.

The surgery aims to minimise cosmetic harm to the breast and maintain its appearance as much as possible while treating the cancer effectively.

This, in turn, helps the patient’s quality of life compared with the traditional approach.

Mrs Shaw is now the global patient advocacy lead for the Oncoplastic Breast Consortium to improve surgical outcomes for all breast cancer survivors.

The consortium, which was founded in 2017, consists of breast cancer surgeons and a patient advocacy group.

The advocacy group recruits patients with a range of surgical experiences so that it can give its view on a variety of procedures.

Mrs Shaw was diagnosed shortly after moving to Basel for work. She works for Johnson & Johnson, the medical devices and pharmaceutical giant, as senior director in market supply chains for Europe, Africa and the Middle East.

The lump in her breast, which was almost 3cms, was discovered during an annual company medical back in the UK and the next day Mrs Shaw was told it was cancerous.

She chose to undergo treatment in Switzerland and asked her colleagues in the company’s oncology department who was the best person to help. They recommended Prof Weber.

Mrs Shaw, who has two children, Alice, 22, and Tom, 21, emailed him and was in his office in Basel the next day. A week later she had surgery at the university hospital.

“It was six hours to have the tumour removed and be reconstructed by the plastic surgeon at the same time,

“What they did for me is at the same time as taking the cancer out of my breast, they operated on the healthy right breast so I was
symmetrical.

“They probably took a third of my left breast out and did basically the same with the right. I came out with a better body than I went in with!

“I asked when could I go home and Prof Weber said, ‘When you can walk up and down the corridor three times.’

“The following day I walked 2km around the grounds of the hospital and then said, ‘Can I go home now?’”

Mrs Shaw, who had only three days off before returning to work, added: “I think I was simply lucky in that I had one of the best guys in the world doing my operation.

“The cancer was caught relatively early before it spread.”

Her surgery was followed by a month of radiation treatment with sessions every day.

Mrs Shaw said: “I have to take drugs every day and I have to go for check-ups every four months.

“I also have to have bone infusions twice a year because the side effects of the drug can cause osteoporosis.” During her radiation treatment, she was approached by
EyeforPharma, which publishes news on the pharmaceutical industry, about her diagnosis and treatment.

Mrs Shaw explained: “Because of that Prof Weber realised, I think, that I probably had quite good communication skills. He approached me and said, ‘You could be someone really helpful in furthering the cause’.

“He said, ‘Can you help me offer other women the same level of care you’ve had?’ What woman is going to say ‘no’? I was honoured to be asked.

“The surgical options for women are actually quite extensive. Oncoplastic surgery only happens in 20 per cent of surgery worldwide at the moment.

“In more conventional surgery you have the cancer removed and you come out and you talk about reconstruction options and then have an operation.

“In oncoplasticity, general speaking, you have one operation which takes longer.”

Mrs Shaw says it is important for a woman to have a body that she is happy with.

She explained: “A lot of challenges come from post-operational mental health issues. You come out lop sided or have one breast missing.

“When you have a cancer diagnosis your first reaction is, ‘Oh my God, get it out’.

“With oncoplasticity it’s all about quality of life for the patients and better outcomes, so we really need patients in that conversation.

“I met the plastic surgeon three times in the week before the operation and said, ‘What size do you want to be?’

“It’s more of a discussion about what you’re going to look like rather than about getting the cancer out.”

Mrs Shaw began working with the organsation as a volunteer early last year.

“Yet it is the surgical outcomes that women have to live with and that have the most impact on the long-term mental health of a breast cancer survivor.

“I spoke to many, many women who have had horrific outcomes from conventional surgery.

“The point of the OPBC is about educating and sharing the knowledge and basically trying to get more surgeons to understand the benefits of oncoplasticity so we can get the 20 per cent up to 100 per cent.

“Our mission is that it should be the standard for all operations, not just the 20 per cent. It’s about having these choices.”

Mrs Shaw, who moved to Watlington when she was nine and attended the town’s primary school and the former Icknield School and King James College in Henley, has recruited a lead patient advocate in the countries where the consortium has the higher membership.

She also wants more women involved in research. The OPBC currently consists of 566 members from 79 countries but this is a small portion of the surgical population around the world.

Earlier this month, the consortium’s research study, called Knowledge gaps in oncoplastic breast surgery, was published in the Lancet Oncology and Mrs Shaw was credited as a co-author, a rarity for a patient.

She said: “It gives us more momentum, not only to raise awareness and get more members and surgeons involved in our work, but to influence the policy makers and funding bodies, which is really important.”

Mrs Shaw is currently raising money for the consortium, as well as Save the Children and the European Pulmonary Hypertension Association, with the bike ride.

She is riding with Jane Griffiths, her former boss at Johnson &
Johnson, and the pair hope to raise £30,000.

The women are set to complete the challenge in Saint Gervais les Bains in the French Alps next week.

The money for the consortium will be used to support patient involvement, enabling more women to be part of the research.