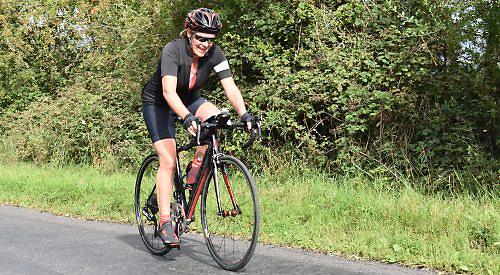 A WOMAN from Watlington raised more than £10,000 for a charity after cycling the equivalent height of Mt Everest.

She then completed another three ascents and descents in order to get to her target of 80.

Mrs Swanson, 47, who runs Chiltern Pet Partners with her husband Adam, began her challenge at 10.55pm and finished at 7pm the following day.

She said: “I loved it from start to finish. I never once had a dark moment — it was wonderful.

“I kept thinking ‘It’s going to start getting really painful’ but it didn’t. In my wildest dreams I couldn’t have imagined it going any better.”

She listened to an audiobook of La Belle Sauvage by Philip Pullman during the night as she rode up and down the hill.

At 3.15am she suffered a puncture on the way down so her husband, who was in a camper van at Watlington Hill Farm, came out and fixed it for her.

She also experienced heavy rain during the night, which slowed her descent but then later in the day it was bright and clear.

Mrs Swanson was accompanied at times by friends and riders from other clubs.

She said: “I had riders from all over who wanted to ride up with me. A really good friend of mine turned up on a horse and rode up with me.”

Her husband accompanied her at the beginning of the challenge and joined her at the end on top of the hill along with supporters who cheered and sounded car horns.

Mrs Swanson said. “I went into shock about an hour after I’d finished and my husband had to put me to bed. I had never been so fatigued in my life.”

She is only the second person from the UK to have achieved the feat on Watlington Hill. The other is cycle racing professional Joe Harris, from Sonning Common, who did it in May.

The money raised will go to Medical Detection Dogs, which trains dogs to detect the odour of human disease. A stall at the top of the hill was selling cakes to raise money for the charity, which is currently training six dogs to be able to detect covid-19.

Mrs Swanson, who also raised £2,500 for the charity in 2013 with a London to Paris bike ride over three days, said: “Thank you to everyone who supported me, whether they sponsored, came out or cheered. I would never have done it without the support.”

She also thanked Ian Pryor of FW 4x4, who loaned the couple the camper van, and Lindsay Howard Dean for allowing them to use the farm as a base.