Hoard on show at first library event since lockdown ended 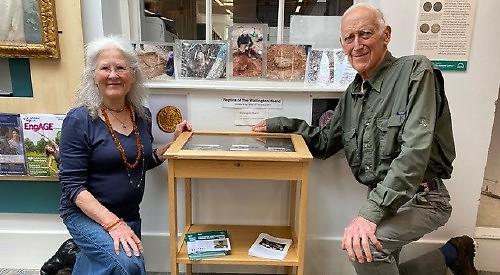 ABOUT 30 people attended a private viewing of the Watlington hoard replica at the town’s library as part of the Chilterns Heritage Festival.

Visitors were able to view the hoard and handle some of the replica coins under the guidance and supervision of experts.

There was also a short presentation about the hoard, which was discovered near Watlington in 2015 and acquired by the Ashmolean Museum in Oxford following a fund-raising campaign.

The replica, which was commissioned by the people of Watlington, was made by the Ashmolean and unveiled in 2017.

Philip Pinney, former chairman of the Friends of Waltington Library, which organised the event, said: “People were very interested to learn about the hoard and seemed very pleased to be able to see the replica. We covered its history and why it’s a key discovery which offers a unique look at that part of our heritage.

“Due to covid, we had to restrict the number of people who could attend. It was the first event we have had in the library since lockdown but we hope to be able to hold bigger events again in future so that more people can learn about that part of history.”

Anna Tilley, who now chairs the Friends, said: “The event
produced an enthusiastic response from those who were there and we were delighted to be able to take part in the festival.

“Thanks to our wonderful hoard guides for making this possible by sharing their knowledge and expertise with our visitors, all of whom seemed to enjoy and appreciate the opportunity.”

The find is significant because it contains so many coins of Alfred the Great, who was King of Wessex from 871 until 899, and his lesser-known contemporary Ceolwulf, who ruled Mercia from 874 until his death in 879.

There are 13 examples of the rare “two emperors” penny, which shows the pair seated side-by-side, suggesting an alliance between their kingdoms, which challenges historical claims that Ceolwulf was a “puppet” of the Vikings.