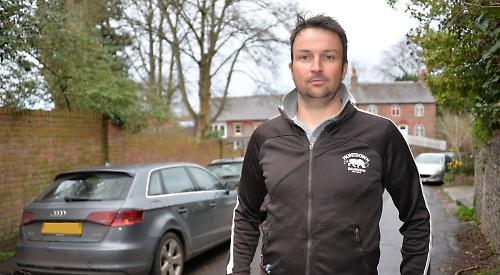 A MAN says he is “gutted” after a classic car he restored to working condition was stolen from outside his house.

The red BMW 325i belonging to William Skewes was parked a short distance from his home in Hardwick Road, Whitchurch, when it was broken into and driven off at about 11.15pm on Wednesday last week.

The thief drove off at high speed towards High Street before turning right up the hill towards Crays Pond.

Mr Skewes, 42, whp had been entertaining guests, said he heard an engine starting and quickly realised that it belonged to his car. But by the time he had got outside to investigate, the car had already gone.

He has reported the theft to the police, who have added it to their database of stolen vehicles, but says he is resigned to never seeing it again.

Mr Skewes had insured the vehicle but says he cannot face buying and restoring another because he had put so much effort into this one.

The car was built in 1988 and has an E registration number plate. Mr Skewes bought it for £4,000 in August. The vendor had kept it on a driveway for 10 years and it couldn’t be driven due to numerous mechanical faults.

Mr Skewes spent several hours every week replacing engine components in a garage behind his house.

He also tracked down original finishings and dials to replace those which had been swapped for cheaper alternatives over the years. He believes his work roughly doubled its value.

Mr Skewes had only recently got the car working again and was looking forward to taking it on a driving holiday to Cornwall with fellow enthusiasts in the summer.

He said: “I’d had a fairly sociable evening and was just standing in the front bedroom when I heard a distinctive engine noise and thought, ‘Oh, that sounds just like mine’.

“I then heard it getting into gear and thought ‘Oh dear, that actually is mine’.

“I felt awful as it dawned on me but luckily nobody was hurt, which is the most important thing.

“I’ve gone through all the emotions from grief to anger at how they could have the cheek to steal something that didn’t belong to them but there’s no point getting too wound up about it.”

Mr Skewes, who runs the Camper Café mobile coffee van with his partner Beth Baxter, said: “I used to have similar cars in my younger days so I thought I’d get myself a nice classic and do it up for a hobby.

“I put a lot of time into it and it really was my pride and joy — the only upside is that I’ll be talking to Beth a lot more in the evenings now!

“I’m very sad that I hadn’t really had the chance to drive it very much.

“I drove it a little over the winter and was really looking forward to doing more when the weather improves.

“I’ve just had to cancel an order for some new tyres and tell my friends that I won’t be joining them in Cornwall.

“The police have been very helpful and have made a great effort to get the word out but there is only so much they can do and it’s easier for me to accept that I probably won’t get it back.

“I can’t see myself going and buying another because, to be honest, this has hurt me.

“I was totally gutted at first, although I’m feeling better now. I don’t want to give anyone another opportunity.”

The incident was captured by a neighbour’s CCTV cameras but the image was poor because it was dark.

The suspect is believed to be a man who was fairly short in height.