Award for walks champion and ‘force for good cheer’ 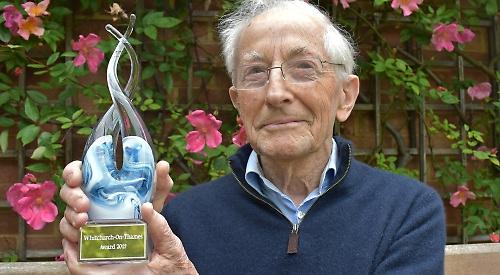 A MAN who revived the footpaths surrounding Whitchurch is the first winner of a new award for outstanding contributions to the community.

The 87-year-old received a glass trophy with an engraved plaque from parish council chairman Jim Donahue.

Mr Hartley, who has lived in Swanston Field with his wife Betty since 1964, has published seven editions of his guide to walks around Whitchurch and used to lead group hikes for the society.

He began researching walking routes in 1972 when the couple bought their first dog Lass, a Labrador, and realised many paths were marked on maps but weren’t signposted or had become overgrown.

These included several between Whitchurch Hill and the remains of the Iron Age fort overlooking Hardwick Road plus others crossing Path Hill, Goring Heath and the Hardwick estate.

Mr Hartley, a retired electrical engineer, was co-opted on to the parish council and worked with groups like the Chiltern Society to persuade landowners to open up the paths.

He devised a series of walks for the parish newsletter and turned this into a book, which was published by the Whitchurch Society in 1980 and has now sold about 2,000 copies. In 2008, Mr Hartley began leading hikes four times a year and would lecture participants on the history of the area as he had researched its connections from the Bronze Age to the Saxon era.

In 2011 he persuaded Oxfordshire County Council to replace the steps it had removed from a section of Hartslock bridleway, which runs from Whitchurch high street to Goring via Hartslock Wood.

The steps were in poor condition but without them the slope was too steep and slippery for some to negotiate. The new ones were named after him as a tribute.

Mr Hartley stepped down from the quarterly walks in 2015 but still walks shorter distances with his third Labrador Molly, mostly around the Hardwick estate, and advises others on the best routes.

He said: “When I started walking my first dog we were always in the road and I thought, ‘this is stupid, there must be some footpaths’ so I dug out some maps and planned some proper circular walks.

“The problem was that many of the paths didn’t appear to exist. They were marked on the map but were very infrequently used and didn’t seem to actually be there on the ground.

“Things have definitely changed since then because when I first arrived in the village people weren’t very interested in walking or felt it was unsafe but when I did the first walk in 2008, about 100 people turned up.

“A lot of those walks are too far for me now — I’m down to a few miles but I still take people around the area and throw in a bit of history as well.

“You can stand at one point looking over the village and see 4,000 years of history. I use a little bit of imagination when I’m boring people about it but I’m sure most of what I tell them is accurate!”

Mr Hartley grew up in Sheffield and became an apprentice electrical engineer in the city’s steel industry aged 16.

He was training for his National Service at Aldershot when he met Betty, then a nurse at the Royal Berkshire Hospital in Reading, and they married at St Leonard’s Church in Woodcote in 1957.

The couple initially lived off Reading Road in Woodcote with Mrs Hartley’s parents Harold and May Wynn, then briefly moved to Purley before buying their current home. They have three children, nine grandchildren and one great-grandchild. Mr Hartley spent most of his career working at the National Institute for Nuclear Science near Didcot, first helping to design and build the Nimrod particle accelerator and later as head of safety. He retired in 1992.

He developed a love of walking from his time as a boy scout and later participating in the Outward Bound scheme.

He has also walked extensively in the Lake District and Yorkshire Dales as well as in the Pyrenees and New Zealand.

He said: “Walking has been hugely beneficial for me and I’ve been pretty wide-ranging, although there are still lots of places I would have loved to visit.

“I was asked if I would accept the award a few weeks ago and was very proud to know that people admire what I’ve done to enhance life in the village.

“I think people know me because this is a lovely community and I stop and talk to everyone in the street.”

The award organisers said: “For more than 30 years, Eric has overseen the publication of his booklet and there can be few houses in the village without a copy.

“Through this work, Eric has become a champion of the local rural environment, protecting local footpaths, encouraging landowners to grant permissive rights over their land and educating us all about local and natural history. The Hartley Steps on the Thames Path commemorate his efforts in this respect.

“Above all, Eric will be forever recognised, especially perhaps by fellow dog-walkers, as the nicest, most friendly and most courteous of people — a real force for good cheer around the village and a great contributor to life in Whitchurch.”