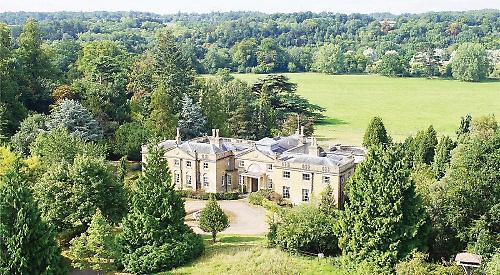 THE owner of an estate wants to erect an 8ft fence along part of the perimeter to protect himself from intruders.

David Pain bought the dilapidated 125-acre country estate, which is said to be worth at least £10million, from property dealers Twinsectra last year.

It hadn’t been maintained since the previous owner Martyn Deaner moved out in 2010 and youths would break in and start fires, spray graffiti and reportedly take drugs.

Mr Pain started putting up the steel, spike-tipped palisade fencing along the southern half of Hartslock Bridleway, off Whitchurch high street, earlier this year.

When residents complained, South Oxfordshire District Council ordered him to stop and submit a retrospective planning application, which he did.

Mr Pain already has a steel fence along the bridleway and now wants to erect a further section along the western half of his driveway off Major Road in place of an old wooden fence.

He says he would plant a yew hedge along this and laurel along the existing fence to address concerns that it spoils views of the Chilterns Area of Outstanding Natural Beauty.

However, dozen of villagers have written letters of objection and Whitchurch Parish Council has called for permission to be refused.

The objectors say the design is too “aggressive” and leaves too little space on the bridleway, which is open to traffic, for pedestrians to get out of the way of vehicles.

They say the Manor Road fence would run behind the village hall, reducing the light coming in from that side and making the hall less attractive for functions.

Vivien Chambers, of Hardwick Road, said: “To erect a fence without planning permission is very presumptuous and permission should not be given just because it is a ‘fait accompli’.”

David Lucas, of Swanston Field, said: “These are some extreme lengths to keep photographers and picnickers out and it gives the impression that we live in an area of high crime when in fact levels are very low.

“I believe Coombe Park has only experienced recent issues because of the deterioration in the old fence and because it has been vacant.

“The situation could be expected to return to normal with an intact wooden fence and resuming occupancy.”

The parish council says it understands Mr Pain’s need for security but the fence design is “intimidating and severe” and not in keeping with its surroundings.

It says any new fence should also be wooden and no taller than 6ft 6in.

Chairman Jim Donahue says: “The community would be happy to welcome our new neighbours into our quiet and lovely village and will work to ensure they are safe and secure.

“However, we don’t believe that the current aggressive measures and plans are the best way to achieve this.”

John Case, footpaths officer for Henley and Goring Ramblers, said: “The materials and proportions are quite unsuitable and it should be moved back to at least the line of the original fence.”

Before Mr Pain bought the estate, security firm SPS said it had thrown out more than 300 people, some armed with crowbars and other tools.

It said any new owner should clearly define the estate’s borders to prevent offenders claiming they didn’t know it was private.

It said websites devoted to “urban exploring”, in which participants break into disused buildings, list Coombe Park as a target and “actively promote a high level of intrusions, as though it was a game”.

It says new fences are needed but the owner should also work with the community, encouraging residents to report sightings of suspicious individuals.

Mr Pain says he still encounters intruders
wandering around his property which he finds “very disconcerting”.

He says he will move the fence back and paint it green to make it blend in as well as leaving gaps for wildlife such as hedgehogs.

The estate was built as a private residence in 1865 and served as a US Air Force rehabilitation centre during the Second World War.

Its grounds were designed by Humphry Repton, who also landscaped Longleat House and the Royal Pavilion in Brighton.