Farmer of the future 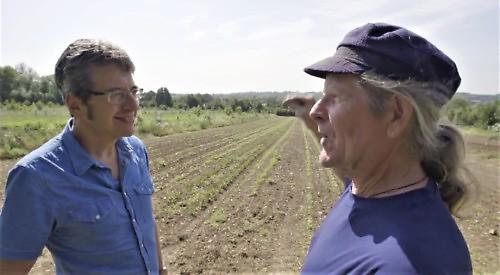 AN organic farmer from Whitchurch has been hailed as the future of the industry.

Iain Tolhurst, who runs Tolhurst Organic on the village’s Hardwick estate, appeared on a TV documentary about the environmental damage caused by raising livestock.

He was interviewed by environmental activist George Monbiot as part of Channel 4’s hour-long special Apocalypse Cow, which was broadcast last week.

Mr Tolhurst founded the farm more than 30 years ago and grows only plant crops according to “stock-free” principles, which mean he uses neither manure nor artificial fertiliser.

Although his land is stony, he keeps it fertile by allowing weeds with long roots to grow so that they pull nutrients up from deep within the soil. These are then cut and scattered on the land, making it easier for produce to grow.

The only material he orders from elsewhere is woodchips, which attract a fungus that improves fertility.

Mr Tolhurst, who farms the land off Hardwick Road with his wife Tamara and daughters Eugena and Rose, was visited by Mr Monbiot and the film crew last summer.

He was filmed ploughing fields in his tractor and harvesting potatoes while explaining his methods.

He tapped several large rocks on the ground with a trowel, which made a loud ringing sound, and said: “You can hear our soil because it’s 40 per cent stone.

“If you’re bringing manure from another farm, you’re effectively bringing someone else’s land. That means they’ve got to get their fertility from elsewhere and so it goes on.”

Mr Tolhurst keeps pests at bay by supporting populations of insects such as ladybirds and butterflies, which eat smaller bugs that can destroy crops.

Mr Monbiot, who is a vegan, told viewers: “It looks like something from the past but I think this is the future. Every farmer I know, even organic ones, use some kind of fertiliser or manure except this one.

“Iain has found a way to make these 17 acres of scrappy land sing. It’s completely different from the standard agricultural model of bringing nutrients in from outside and spreading them on the land.

“Although this is an organic farm, its production methods are approaching conventional levels, which is a remarkable achievement. It’s also running at a profit and not many farms in Britain can say that.

“Even better, the fertility of the soil is rising slightly and every corner is swarming with with life because instead of using pesticides, Iain is farming insects.

“Why should allowing insects to manage themselves be so radical? I hope that before too long, this will go mainstream. There’s a sense of working with nature, not against it, and not being control freaks to produce our food.”

For the programme, Mr Monbiot travelled around the world looking at different methods of farming and managing wildlife.

He found more than 50 per cent of British land is dedicated to farming animals or growing their feed while crops for humans take up just 20 per cent and trees make up just 10 per cent.

He said far more space should be given to trees as they absorb carbon dioxide to help reverse climate change, whereas livestock farming produces gases which exacerbate the problem.

He looked at various solutions, including artificial meat grown from cells and a type of bacteria that produces edible protein.

Mr Monbiot and Mr Tolhurst met again at the Real Farming Conference in Oxford, where the farmer gave talks about crop rotation and growing food for health.

He told the Henley Standard: “George was a very enthusiastic visitor to the farm and he’s going to be making several more visits and in-depth studies this year as he’s researching a book on global farming solutions.

“He was very impressed with our high yields of food and how untouched the delicate balance of nature is here. When we discussed the documentary, George told us that filming at Tolhurst Organic had made a great contribution.

“We’re very pleased to be included in such work because a great part of what we do is education on stock-free farming and many groups come every year, from all over the world, to learn from our model.

“With this documentary, we can reach and inspire many more people to find global solutions for the food we must all eat.”

The farm, which is run as a community interest company, grows more than 100 types of vegetable and sells them through a local delivery scheme as well as Lin’s Veg Shed, a self-service shop which opened last year.

It is named after Lin Tolhurst, Mr Tolhurst’s former business partner, who came up with the idea but died before it became a reality.