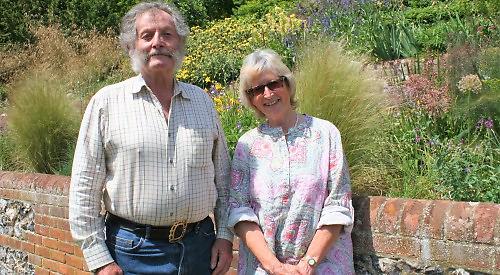 A COUPLE who have supported their community for more than 40 years have won the second annual Whitchurch Award.

Peter and Sally Woolhouse, of Hardwick Road, moved to the village from Tilehurst in the late Seventies and have been involved in various initiatives ever since.

Mrs Woolhouse, 72, a retired computer systems analyst, was among the first members of the village’s wildlife habitat study group when it was formed in 1997.

She and her colleagues have planted up many green spaces in Whitchurch, including the brick maze off Hardwick Road, where they have drawn up a management plan and regularly organise family activity days.

Her husband, 74, a retired bricklayer, laid the maze free of charge in 2004 after it was proposed by fellow resident Nick Brazil.

The couple have overseen two refurbishments and arrange working parties to maintain it.

They pick up litter around the village and have helped to dig drainage ditches, trim hedges and improve the verges along Hardwick Road, which had become heavily worn where cars would pull over to let others pass.

Since 2002 Mrs Woolhouse has run the Whitchurch Society’s annual arts and crafts exhibition at the village hall, which draws a large number of entrants to compete for prizes in different media and age categories.

She regularly gives talks about nature at the village primary school and more recently has started writing a column on the subject for the village website.

Mrs Woolhouse is also secretary of the friends group for St Mary’s Church in the village and St John’s at Whitchurch Hill, which was formed in 2016.

Last year, the group repaired the clock bells at St Mary’s after raising £10,000. These had been out of service for almost two decades after developing an electrical fault.

The couple are also a regular fixture at summer fetes in the area, where they attend with an old-fashioned gramophone and a selection of jazz records which people can play for a small charge.

Mr Woolhouse regularly carries out odd jobs around the village, including repairing damage caused by vandals.

They were nominated for the award, which was launched by the Whitchurch Society last year, by other residents and picked as winners by the parish council. The news was announced at the parish’s virtual annual assembly and the couple will receive the trophy in the coming weeks.

Jim Donahue, chairman of the council, said: “There were a number of nominations for them individually or together and we agreed they were both highly deserving.

“They do so much for the good of the village… it is not just what they do, but how they do it. They are two of the nicest people you will ever meet, always having time to listen and talk and always putting others first.

“Their dedication is clear and with their complementary skills they have set a great example. They have made a huge difference to life in our village and for that we should all be grateful.”

The Woolhouses met at a pub in Wiltshire and married in Gloucestershire, where Mrs Woolhouse grew up, in 1975 and were drawn to Whitchurch by its riverside location.

They have two grown-up children, Lorna, who lives in Checkendon, and George, who lives in Brightwell-cum-Sotwell, and two grandsons.

The couple follow in the footsteps of Eric Hartley, who won the first Whitchurch Award for his work preserving and chronicling the village’s footpaths.

Mrs Woolhouse said: “We were absolutely amazed when they told us. Eric was a very worthwhile winner and there are so many people doing good things in the village so we’re very grateful to have been recognised like this.

“We’re very proud to be part of such an active, sociable community and don’t want to blow our own trumpet too much because many others are involved in the activities that we take part in.

“You tend to get roped into things and Peter will always end up helping, like when he sets up the hall for the exhibition. There’s lots I couldn’t do without him and vice-versa — I think we complement each other very well.

“We’ve always enjoyed our work with the habitat group as there’s a real diversity in the local environment and we want to make more people aware of that.

“I’ve enjoyed writing the nature column because I’ve had to revisit the topic with an unpractised eye and write for people who are still learning.

“The art and craft exhibition is also very enjoyable and it’s going to be very hard for me to pass it on to someone else, though it wouldn’t be possible without a huge team behind us.

“There’s always a huge build-up of excitement as the date gets closer and it gets great feedback afterwards. We feel very lucky to remain active in our retirement and not to have many big commitments taking up our time.”