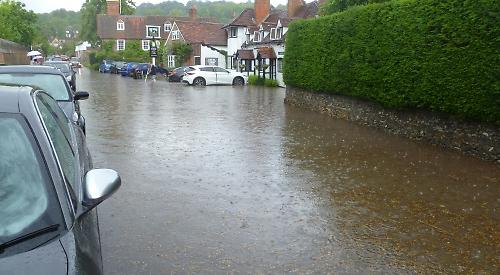 A PUB landlord lost his carpets and some personal possessions after being hit by a flash flood.

About 6in of water poured into the Greyhound in Whitchurch, which is at the bottom of the hill in High Street, following a sudden torrential downpour of rain and hail between 4.30pm and 5pm on Tuesday last week.

The water on the road outside was knee-deep in places and was seeping through the front door of the pub within 10 minutes of the heavens opening.

It also got into landlord Mark Lovett’s garage next door, ruining speakers, a freezer and some fishing equipment, as well as flooding part of the back garden.

Mr Lovett, who has repainted the inside of the pub during the coronavirus lockdown, ran upstairs as soon as the weather turned and tried to gather enough towels to create a makeshift blockade.

Once the pub had flooded, he went outside and began sweeping debris from the drains in the street to help the water clear more quickly.

A passer-by called the fire brigade and a crew arrived about 40 minutes later. The firefighters opened a hatch on Mr Lovett’s land which leads to a large drainage culvert under the street and the water soon vanished. He said: “It started absolutely tipping down — I mean in Biblical proportions. As I put it on Facebook when I uploaded a video, ‘it never rains but it pours’.

“It’s hard to believe considering the great weather we had in April and May.

“Unfortunately, there’s not a lot you can do in that situation. I emptied the airing cupboard to try to find something to block the door but it all happened so quickly.”

Mr Lovett said the water had begun to slowly drain when he brushed the drain covers, adding: “It really picked up when the firefighters opened that hatch. I had no idea what it was for but it looks like there’s a huge tunnel running under the pub. It had been shut for as long as I can remember and the firefighters had to open it with a crowbar.”

Mr Lovett, who had to shut the pub on March 23 and has claimed lockdown relief from the Government, is now surveying the damage by video in order to file a claim with his insurer.

Despite the setback, he says he will do everything he can to re-open next month when the Government says it is safe to do so.

He said: “I’ll definitely have to replace the carpets because they’re covered in mud and really not looking good. Luckily, some of my floors are tiled or waterproofed. I’m re-opening on July 4 come hell or high water because although the Government grant has been very handy, I can’t be closed for much longer.

“I could have done without this but you’ve just got to soldier on and do what you have to.”

Whitchurch Parish Council agreed to fund a survey of the drainage culvert in the spring but this has been delayed because of the covid-19 outbreak. The council says it remains a priority.

It has also asked Oxfordshire County Council, the highways authority, to sweep any remaining debris from the road as soon as possible and to review drainage further up the hill leading into the village.

Meanwhile, villager Jonathan Raymond has launched a £2,000 appeal to help Mr Lovett recoup his costs. This raised more than £750 in its first 24 hours, including contributions from parish councillors.

Mr Raymond said: “After an unsure and difficult start to life in Whitchurch and recently completing renovations, Mark has suffered a devastating flood and needs your help to restore what he had already paid for.

“The Greyhound has been, and should be, one of the hubs of the village and he has kept it alive for the past two years. Please help if you can.”